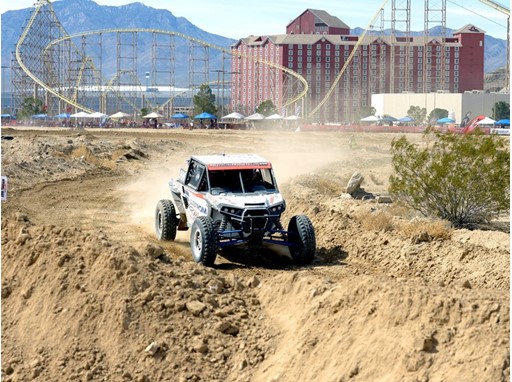 PRIMM, Nev. -- Las Vegas native Rob MacCachren, who in his 30-year career has won nearly every race and championship imaginable, finally took the trophy at the 2017 Polaris RZR Mint 400 presented by BFGoodrich Tires on March 4. MacCachren took home $10,000 from BFGoodrich Tires, $10,000 from Fox, and a brand new Polaris RZR. The Polaris RZR Mint 400 presented by BFGoodrich Tires returned to Las Vegas March 1-5. Known as “The Great American Off-Road Race,” the race was held March 4, with pre-race festivities beginning earlier in the week. The massive field of 370 race teams included a record-setting 57 unlimited trick trucks, 106 UTV’s, and 36, 6100 trucks. The world famous Mint 400 has always attracted celebrities and racers from around the globe. This year Jay Leno, The Diesel Brothers, Tanner Foust, and Jessi Combs joined the field of racers.