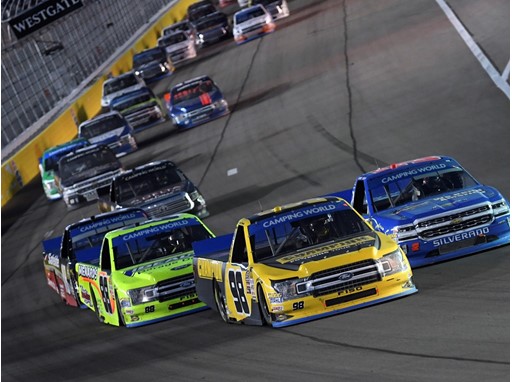 Xfinity Series returns to LVMS twice in 2022; Trucks to be part of March tripleheader weekend again
For the fifth consecutive year, the NASCAR Xfinity Series will make two stops at Las Vegas Motor Speedway in 2022, while the NASCAR Camping World Truck Series again will kick off a tripleheader of racing action in March. The Xfinity Series will precede the NASCAR Cup Series races on March 5 with the Alsco Uniforms 300 and Oct. 15 with the Alsco Uniforms 302 in 2022. The lone stop in Las Vegas for the trucks will be Friday, March 4. The speedway announced earlier that the fall event will move three weeks later from its late September date to a mid-October date. For more information, contact Jeff Motley, LVMS, jmotley@lvms.com.

Dolby and MGM Resorts International Launch Dolby Live at Park MGM
Dolby Laboratories, Inc., a leader in immersive entertainment experiences, and MGM Resorts International, a global leader in live entertainment and hospitality, announced the launch of Dolby Live at Park MGM, the first fully integrated performance venue of its kind to offer live concerts in Dolby Atmos. Located in the heart of the Las Vegas Strip, Dolby Live (formerly known as Park Theater) is the preeminent location for live music in Dolby Atmos, which offers guests a transformative music experience they won’t be able to find anywhere else in the world. Dolby and MGM Resorts have worked closely over the past months to completely transform Dolby Live into one of the world’s most technologically advanced performance installations. The space now features a fully integrated Dolby Atmos playback system, which was designed, calibrated, and tuned by Dolby engineers to match the size and unique characteristics of the 5,200-seat theater. While the system will be primarily used for live concerts, it has the capability to support a multitude of live events in Dolby Atmos such as musicals, eSport events, and much more. For more information, contact Scott Ghertner, MGM Resorts International, sghertner@mgmresorts.com.

Nobu Hotel Caesars Palace Begins Multimillion-Dollar Refresh Project
As the world’s first Nobu Hotel Caesars Palace commemorates its eighth anniversary, the luxury boutique hotel within the iconic Las Vegas resort embarks on a multimillion-dollar refresh of all 182 guest rooms and public areas. Construction is set to be complete by the end of 2021. This is one of several projects in development as Caesars Entertainment, Inc. expands its longstanding partnership with Nobu Hospitality – the global lifestyle brand founded by Nobu Matsuhisa, Robert De Niro and Meir Teper. To create a more modern, residential feel at Nobu Hotel Caesars Palace, the award-winning global architecture and design firm Rockwell Group has re-envisioned the guest rooms and common areas it first designed in 2013. Rockwell Group has drawn inspiration from kintsugi, the Japanese art of repairing broken pottery with gold epoxy – creating cohesion from collage. This element will create a streamlined, lighter and more luxe take on the original design concept. For more information, contact Kristin Soo Hoo, Caesars Entertainment, ksoohoo@caesars.com.

Downtown Las Vegas Icon El Cortez Hotel & Casino to Commemorate 80 Years this November
This November, the historic El Cortez Hotel & Casino celebrates its monumental 80th Anniversary as the longest continuously running hotel & casino in the ever-changing landscape of downtown Las Vegas. As the only casino listed on the National Register of Historic Places, this Vegas institution has stood the test of time thanks to its dedicated owners, who continually seek to elevate the guest experience while preserving the same vintage charm and authenticity that have captivated tourists and locals for 80 years. For more information, contact Mackenzie Tucky, bread & Butter, elcortez@wearebreadandbutter.com.

Legendary Band Chicago to Return to The Venetian Resort
Due to popular demand, one of the most successful and critically acclaimed rock bands of all time – Chicago – announced it will return to The Venetian Theatre inside The Venetian® Resort Las Vegas in 2022 for the fifth year in a row for a six-show limited engagement. The shows will be held on February 16, 18, 19, 23, 25 and 26, 2022. Hailed as one of the "most important bands in music since the dawn of the rock and roll era," the legendary rock and roll band with horns, Chicago, came in as the highest charting American band in Billboard Magazine's Top 125 Artists Of All Time. And Chicago is the first American rock band to chart Top 40 albums in six consecutive decades. For more information, contact Kelly Frey, The Publicity Lab, kelly@thepublicitylab.com.

Golden Entertainment to bring Atomic Range, a new golf experience, to The STRAT
Golden Entertainment, Inc. recently announced that it entered into a definitive agreement with Flite Golf & Entertainment to bring Atomic Range, a new 92,000-square-foot golf entertainment destination, to seven acres of Company-owned land adjacent to The STRAT Hotel, Casino & SkyPod in Las Vegas. The new Atomic Range will be located on Las Vegas Boulevard, just north and adjacent to The STRAT. Development is expected to break ground in Q2 2022 with a projected completion date by the end of 2023. Construction costs are expected to be approximately $70 million and Atomic Range will create over 500 new jobs. For more information, contact Stephanie Wilson, Wicked Creative, STRAT@wickedcreative.com.

Walk-On’s Sports Bistreaux Set to Bring a Taste of Louisiana to Las Vegas
Walk-On’s Sports Bistreaux, a leading sports dining experience with a Louisiana-inspired menu and family friendly atmosphere, is bringing its unique flavor to the world-famous Las Vegas Strip. Walk-On’s recently announced it will open its first location on the West Coast at Harrah’s Las Vegas, scheduled to open by early 2022. The location will offer guests a taste of Louisiana classics with diverse, made-from-scratch dishes including Crawfish Etouffee, Duck & Andouille Gumbo and Krispy Kreme Donut Bread Pudding, as well as game day classics like burgers and everyday favorites like salads, wraps, and more. The restaurant will also be the first-ever Walk-On’s to feature a breakfast menu, offering current staple items like Voodoo Shrimp and Grits, Beignets, and their popular signature cocktail, the Mad Mary. More than 60 TVs will canvas the restaurant, making it a go-to destination for fans on game day in sports-hungry Las Vegas. For more information, contact Chelsea Ryder, Caesars Entertainment, cryder@caesars.com.

The Bronx Wanderers Celebrate Grand Opening at Westgate Las Vegas
The Bronx Wanderers recently celebrated the grand opening of their new show at Westgate Las Vegas Resort & Casino. Back by popular demand, the father-and-son duo, flanked by their top-notch band, has performed over 1,500 shows in Las Vegas for more than 200,000 fans. This multiple award-winning show thrills its audiences with an up close and personal, yet larger-than-life music performance that takes them on a journey from the early days of Rock ‘N’ Roll right through today’s biggest hits, including numbers from Frankie Valli & The Four Seasons, Dion, Queen and Bruno Mars, as well as some exciting recent additions for the new show. For more information, contact Kelly Frey, The Publicity Lab, kelly@thepublicitylab.com.

STYX Launches 50th Anniversary with Five-Night at The Venetian Resort
Legendary and multi-Platinum rockers STYX are kicking off their 50th anniversary year by taking the Las Vegas stage once again for an unforgettable five-night engagement at The Venetian Theatre inside The Venetian® Resort Las Vegas along with very special guest and fellow legendary and multi-Platinum Rock & Roll Hall of Fame rocker Nancy Wilson (Heart). The shows will be held on January 28 and 29 and February 2, 4 and 5, 2022. The multi-show run will pay tribute to both STYX’s and WILSON’s combined 50 years as one of the most successful rock and roll bands in history and one of rock’s most illustrious guitar legends. For more information, contact Kelly Frey, The Publicity Lab, kelly@thepublicitylab.com.

The Neon Museum receives famed Planet Hollywood sign
The Neon Museum recently acquired the famed Planet Hollywood Restaurant sign that originally rotated upon an iconic column pedestal in front of the Caesars Palace Forum Shops and Colosseum. Donated by Planet Hollywood International/Earl Enterprises, the sign is currently being assessed for conservation and display plans. The sign, which was originally installed in 1994, is comprised of components made from a wide variety of materials including neon, incandescent lightbulbs, metal, and fiberglass. The sign’s core metal structure weighs 12,000 lbs., and the fiberglass globe is approximately 25 feet in diameter. To be moved to the museum, the globe was meticulously dissected into four pieces, each weighing 1,300 lbs. For more information, contact Amy Maier, The Warren Group, Amy@twgpr.com.

Sir Rod Stewart Extends Hit Las Vegas Residency into 11th Year with New 2022 Concerts
Legendary Rockstar Rod Stewart will return to Las Vegas in 2022 for 10 shows of his acclaimed residency “Rod Stewart: The Hits.” presented in partnership by Caesars Entertainment and Live Nation Las Vegas, at The Colosseum at Caesars Palace. “Rod Stewart: The Hits.” will perform select dates May 13 – 21 and Sept. 23 – Oct. 1, 2022. For more than 10 years, the two-time Rock and Roll Hall of Fame inductee has delivered an arena-sized concert in an intimate concert experience that's exclusive to Las Vegas audiences, with no seat more than 145 feet from his majestic stage. Featuring chart-topping hits spanning Stewart’s unparalleled over five-decade career the production remains one of the best-reviewed and must-see shows on the Las Vegas Strip. The hits-packed setlist includes songs like, "You Wear It Well," "Maggie May," "Da Ya Think I’m Sexy," "The First Cut is the Deepest," "Tonight’s the Night," “Every Picture Tells A Story,” “Infatuation,” and "Forever Young.” For more information, contact Robert Jarrett, Caesars Entertainment, rjarrett@caesars.com.

The Mirage Announces 2022 Aces of Comedy Series Lineup
The Mirage Hotel & Casino recently announced more than 40 performances for the 2022 Aces of Comedy series. Comedians who will take The Mirage Theater stage include George Lopez, Daniel Tosh, Bill Maher, Ray Romano and David Spade, Bob Marley, Jim Jefferies, Kathleen Madigan and Iliza Shlesinger. The Aces of Comedy series at The Mirage Hotel & Casino features one of the country’s most comprehensive and diverse comedic lineups. Over the last decade, the 1,257-seat Theatre at The Mirage has been the place to enjoy the best comedy in Las Vegas. For more information, contact Katharine Sherrer, MGM Resorts International Public Relations, ksherrer@mgmresorts.com.