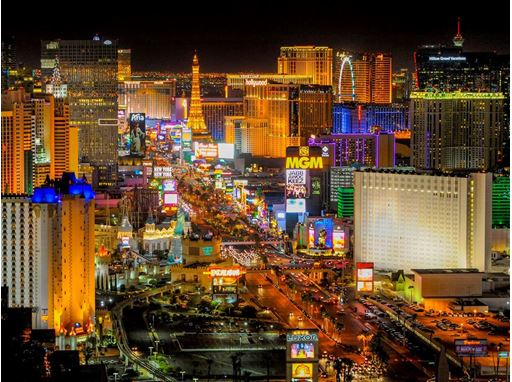 LAS VEGAS – Visitor spending is on the rise in multiple categories including food and beverage, local transportation, shows and entertainment, shopping and sightseeing, according to the Las Vegas Convention and Visitors Authority’s (LVCVA’s) 2016 Visitor Profile Study. Additionally, 27 percent of visitors were in Las Vegas for the first time, an 11 percent increase from 2015.
“The Visitor Profile Study is a tremendous resource for determining the trends and visitor traits that are integral to formulating our future strategies for the LVCVA and our resort partners to market the destination,” said Kevin Bagger, executive director of the LVCVA Research Center. “This year’s study contains great insights into today’s visitor, including that visitor spending is on the rise and there is a change in the visitor demographic. We’re attracting more first-time visitors to the destination, and those visitors are younger and more diverse than in years past. We also saw growth in the number of non-gaming visitors. However, the visitors who did participate in gaming budgeted to spend more on gaming than in previous years.”
Visitor spending is up on average across all key areas. Average per trip spending on food & beverage increased from $292.42 in 2015 to $319.93 in 2016, an increase of 9.4 percent. Also showing significant increases over previous years was average per trip spending on sightseeing at $35.93, up from $14.86 in 2015, and shopping at $156.91, up from $122.66 in 2015.
Additionally, in 2016 Las Vegas enjoyed record-breaking visitation for a third year in a row with 42.9 million visitors, and local tourism had an estimated local economic impact of $60 billion. For the 23rd year in a row, Las Vegas was named as the No. 1 trade show destination in the country by Trade Show News Network, with 57 of the 250 largest trade shows, which is more shows than the next two destinations – Orlando and Chicago – hosted combined. Altogether, Las Vegas hosted nearly 22,000 meetings, conventions, and trade shows, with a record-breaking 6.3 million delegates in attendance, up 7.1 percent from 2015.
Locally, tourism supports approximately 407,000 total jobs, or 44 percent of the workforce, and provides $16.9 billion in local wages. Without tourism, every household in Southern Nevada would pay approximately $2,700 more in taxes.
Other highlights from this year’s study include:
For more than 4 decades, the LVCVA has surveyed visitors to develop the annual Visitor Profile Study, which details trends, attitudes, behaviors and spending habits while visiting the destination. The report presents the findings from 3,600 personal interviews that were conducted throughout the destination during the year, and includes comparisons to results from the 2012, 2013, 2014 and 2015 studies.
To obtain a copy of the LVCVA 2016 Visitor Profile Study, click here.

The Las Vegas Convention and Visitors Authority (LVCVA) is charged with marketing Southern Nevada as a tourism and convention destination worldwide, and also with operating the Las Vegas Convention Center and Cashman Center. With nearly 150,000 hotel rooms in Las Vegas alone and more than 11 million square feet of meeting and exhibit space citywide, the LVCVA's mission centers on attracting ever increasing numbers of leisure and business visitors to the area. Download the virtual reality app, Vegas VR, to experience Las Vegas from your iPhone or Android by visiting http://www.vrtv.vegas/. For more information, go to www.lvcva.com or www.visitlasvegas.com.