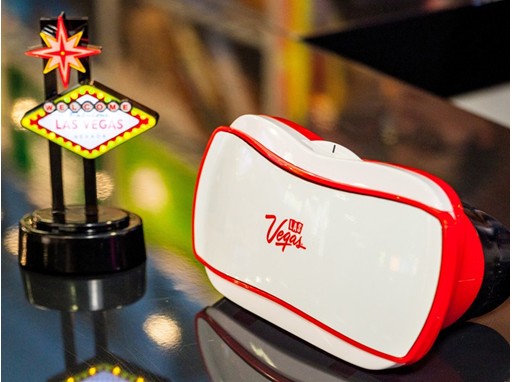 The Las Vegas Convention and Visitors Authority (LVCVA) launched a Virtual Reality Companion app that helps transport trade show delegates and would-be visitors alike to popular attractions in the Entertainment Capital of the World.  The LVCVA showcased virtual reality through Oculus Rift, a technology company that builds and distributes virtual reality head-mounted display units that allow users to have an immersive 3D experience, during the ITB travel trade show in Berlin, Germany.

“Virtual reality is the future of vacation planning,” said Cathy Tull, senior vice president of marketing for the LVCVA. “Users are able to explore what Las Vegas has to offer in a virtual setting and gain the excitement needed to book their own Las Vegas adventure.”

This technology connects the consumer more directly with the Las Vegas experience by placing them inside the destination to participate first-hand. The LVCVA launched a series of 360 degree videos last year as part of the brand’s online GeoVegas experience; the addition of the head-mounted display units makes the experience even more immersive.

The Virtual Reality Companion app allows consumers to download the Vegas VR experience onto their Apple or Android Smartphone. The app, which can be downloaded by visiting http://itb.vrtv.vegas/​​, includes 12 immersive Las Vegas VR experiences that can be viewed directly on a smartphone, or used with a VR Viewer such as a Google Cardboard or Oculus.  The LVCVA will continue to add to the library of immersive experiences in the coming weeks and months.

As a top travel trade show, ITB Berlin was the perfect platform to debut this technology and revolutionize the trade show experience.  Las Vegas is the top trade show destination in North America, hosting 60 of the largest 250 trade shows and nearly 22,000 meetings, conventions and trade shows annually.

ABOUT THE LVCVA
The Las Vegas Convention and Visitors Authority (LVCVA) is charged with marketing Southern Nevada as a tourism and convention destination worldwide, and also with operating the Las Vegas Convention Center and Cashman Center.  With nearly 150,000 hotel rooms in Las Vegas alone and almost 11 million square feet of meeting and exhibit space citywide, the LVCVA's mission centers on attracting ever increasing numbers of leisure and business visitors to the area.  For more information, go to www.lvcva.com or www.lasvegas.com.