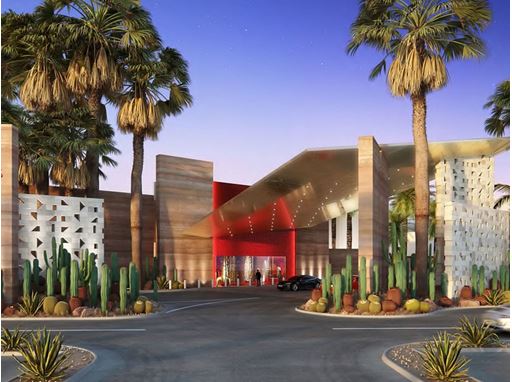 Virgin Hotels Las Vegas to Open with No Resort Fees, Complimentary Self-Parking & Wi-Fi
The reimagined and re-conceptualized casino resort, Virgin Hotels Las Vegas, will make its long-anticipated arrival to Las Vegas on March 25, 2021. In an effort to dazzle guests even before their arrival, Virgin Hotels Las Vegas will remove resort fees. Guests will also be able to enjoy complimentary self-parking and Wi-Fi at no charge, which will be available throughout the resort and in the over 1,500 Chambers. From the very beginning, Virgin Hotels has been proponents of upfront pricing. Their celebrated “championing of the customer,” means there are no resort fees at any of their properties. The brand-wide “No Nickel and Diming” policy also covers free Wi-Fi and “street priced” minibars, meaning drinks, snacks and goodies. Virgin Hotels Las Vegas will welcome guests to enjoy the property to the fullest, including one of the most anticipated curation of culinary experiences under one roof, signature craft cocktails and entertainment in the Bar at Commons Club and Shag Room, gaming thrills throughout the interactive 60,000 sq. ft. Mohegan Sun Casino and much more.

Vegas Golden Knights Welcome the Best Fans in NHL Back to the Fortress
Beginning Monday, March 1, the Golden Knights will welcome the best fans in the NHL back to the Fortress at 15% capacity. In order to ensure a safe and enjoyable experience, there are several guidelines and protocols that have been communicated to season ticket members and fans who have purchased tickets. The number one priority is ensuring the health and safety of fans at Golden Knights home games. The organization is appreciative of everyone’s understanding of these protocols and look forward to welcoming the best fans in the NHL back to T-Mobile Arena. Please note these guidelines are subject to change based on updates, recommendations and guidance from local and state health officials. For more information, contact Sage Sammons, Vegas Golden Knights, ssammons@vegasgoldenknights.com.

Caesars Palace to Introduce Stadia Bar
Caesars Palace is proud to announce the all-new Stadia Bar, anticipated to debut spring of 2021. Stadia will offer a next-level sports viewing experience with lavish amenities, numerous large HD TVs, a menu overflowing with high-end and unique cocktail selections and more. Guests can casually hang out or catch the big game in style with Stadia’s rentable spaces to create an intimate viewing experience for small groups. The 120-seat bar and lounge will be a destination beyond game days, with its modern seating and craft cocktail menu. Stadia’s cocktail menu will feature an array of unique curated selections and an impressive list of highly allocated supreme spirits. These sought-after brands are so rare, they are only available for purchase once a year, with the entire state receiving less than a case. Some of these include Kentucky Owl 10 Year Rye, Pappy Van Winkle 13 Year Rye, Elmer T. Lee 100 Year Tribute and more. Stadia will also carry signature blends of whiskey that are purchased by the barrel, providing guests a one-of-a-kind flavor profile that can only be tasted at Caesars Palace. Food items will also be available via mobile ordering. For more information, contact Gia Silvaggio, Caesars Entertainment, GSilvaggio@caesars.com

Entertainment Returns to MGM Resorts
In accordance with revised state guidelines, MGM Resorts will return David Copperfield, The Australian Bee Gees and Terry Fator’s shows to the stage this month. All other shows have returned.

2021 Minor League Baseball Schedule Announced; Aviators Open Season at Las Vegas Ballpark on May 6
The Las Vegas Aviators, Triple-A affiliate of the Oakland Athletics, are now scheduled to begin the 2021 season on Thursday, May 6 against the Sacramento River Cats, Triple-A affiliate of the San Francisco Giants, at Las Vegas Ballpark. The Aviators will announce further information regarding ticket policy soon, and the revised 2021 schedule when determined by MLB. For more information, contact Jim Gemma, Las Vegas Aviators, jgemma@aviatorslv.com.

Resorts World Las Vegas Partners with Fred Segal to Unveil New Retail Experience
Resorts World Las Vegas recently announced its partnership with iconic Los Angeles-based experiential retailer, Fred Segal, to bring a multi-store destination to the Strip’s newest integrated resort opening this summer. The new location will go beyond retail and bring LA style, food and pop-culture together for a truly interactive shopping experience. Two mini flagship Fred Segal locations, a women’s and men’s shop will be located in the heart of the resort’s 70,000-square-foot retail district. Fred Segal is a pioneer of the shop-in-shop concept so both stores will bring one-of-a-kind pieces and unique brand activations and feature a highly curated collection of fashion apparel, accessories, beauty, gifts and jewelry from brands including Libertine, MadeWorn, DANIELLE GUIZIO, John Elliott, On Running and more – some of which will feature exclusive offerings available only at Resorts World Las Vegas. The dynamic retail destinations will also feature a Sundry Shop, offering a handpicked selection of beverages and snacks inspired by the culture and lifestyle of Los Angeles. For more information, contact Allied Global Marketing (for Resorts World Las Vegas), resortsworld@alliedglobalmarketing.com.

ABSINTHE® is Back at Caesars Palace on March 17
ABSINTHE® returns on Wednesday, March 17, to its center-Strip stage at Caesars Palace where it will play at 7 p.m. and 9 p.m. Wednesday through Sunday. The show is setting aside a limited number of VIP tables at every show. At $1,000 per table, a party of two will be able to sprawl out with comfort in the Impresario’s Reserve section and will receive a bottle of Dom Perignon. Spiegelworld remains committed to providing as safe an environment as possible for its guests, performers, and staff at ABSINTHE by maintaining extensive protocols, as outlined in its Health & Safety Plan. For more information, contact Thomas Judd, Kirvin Doak Communications, tjudd@kirvindoak.com.

The Plaza Hotel & Casino celebrates 50th anniversary
The Plaza Hotel & Casino officially opened on July 2, 1971 in downtown Las Vegas as the largest hotel & casino in the world. It has enjoyed a storied history over the last five decades as an iconic destination that continues to evolve, elevate downtown culture, and enhance the guest experience. The Plaza will celebrate its 50th anniversary with exclusive promotions and special events throughout 2021. For more information, contact Amy E. S. Maier, The Warren Group, amy@twgpr.com.

M Resort Spa Casino Announces First Official Raiders-Themed Restaurant:
M Resort Spa Casino today announced the official name of the highly anticipated Raiders-themed restaurant at the resort in Henderson. Raiders Tavern & Grill is scheduled to open its doors in the coming weeks and will feature more than 3,400 square feet of dining space as well as two bars, Raiders memorabilia and merchandise. The first of its kind, Raiders Tavern & Grill lends its design and atmosphere to the rich history of the Raiders and the enjoyment of watching sports. With more than 45 high-definition TVs, it will be the ultimate environment for fans year-round. For more information, contact Chandra Stepanovich, Dandelion PR, chandra@dandelionpr.com.

LVMS to Welcome Spectators for March 5-7 NASCAR Weekend
The March 5-7 NASCAR Weekend at Las Vegas Motor Speedway will be conducted with a limited number of fans in the speedway seating area. Race fans in attendance will be required to maintain proper social distancing, wear face coverings and be subject to temperature checks at the gate. There also will be no fan access to the pit or garage areas throughout the weekend. The weekend will kick off on Friday, March 5 with the Bucked Up 200 NASCAR Camping World Truck Series event followed by the Alsco 300 NASCAR Xfinity race on Saturday, March 6. The weekend will conclude with the 24th annual Pennzoil 400 Presented by Jiffy Lube NASCAR Cup Series event on Sunday, March 7. For more information, contact Jeff Motley, Las Vegas Motor Speedway, jmotley@lvms.com.

Maluma to Perform at Michelob ULTRA Arena in Las Vegas September 4, 2021
Latin Global superstar Maluma will return to touring with his Papi Juancho 2021 World Tour, making a Las Vegas stop at Mandalay Bay Resort and Casino’s Michelob ULTRA Arena at Saturday, Sept. 4, 2021. In order to safely bring entertainment back to its resorts, MGM Resorts spent months developing and implementing its comprehensive Seven Point Safety Plan and its “Convene with Confidence” program, which outline the company’s approach to protecting the health and safety of guests and employees. The multi-layered plans look at everything from sanitation stations, masking and physical distancing to digital solutions that minimize touch points as well as enhanced cleaning protocol. Details around both programs can be found at MGM Resorts Entertainment Convene with Confidence. For more information, contact Katharine Sherrer, MGM Resorts International, ksherrer@mgmresorts.com.

The Weeknd Bringing After Hours Tour to T-Mobile Arena in 2022
The Weeknd’s 104-date global After Hours World Tour will make a Las Vegas stop at T-Mobile Arena Saturday, April 23, 2022. Along with the addition of 39 new tour dates, The Weeknd also released The Highlights in early February. The Highlights is a way to present some of The Weeknd’s most notable works in one place. While this isn’t a “Greatest Hits” album it does provide a new listener a rich foray into some of the iconic artist’s best and favorite work. For more information, contact Kelly Frey, The Publicity Lab, Kelly@thepublicitylab.com.

Rail Explorers Announces Fireside Twilight Tours
Rail Explorers, the year-round, all-ages, outdoor-adventure attraction featuring pedal-powered rail bikes, offers guests new, after-dark Fireside Twilight Tours. The experience makes an appealing new addition to their existing tours, offering an enchanting atmosphere for date night or a family adventure. Guests pedal the Rail Explorers rail bikes four miles downhill from the Nevada State Railroad Museum to the Railroad Pass picnic area, where they may relax in the signature red Adirondack chairs situated around the fire pits. Plus, they are encouraged to bring their own marshmallows and sticks for roasting fireside or purchase a s’mores kit in the Rail Explorers gift shop. The experience concludes with a ride aboard a historic train back to the tour’s starting point. Available Thursday, Friday, Saturday, Sunday. For more information, contact Vanessa Thill, The Vox Agency, vanessa@thevoxagency.com.