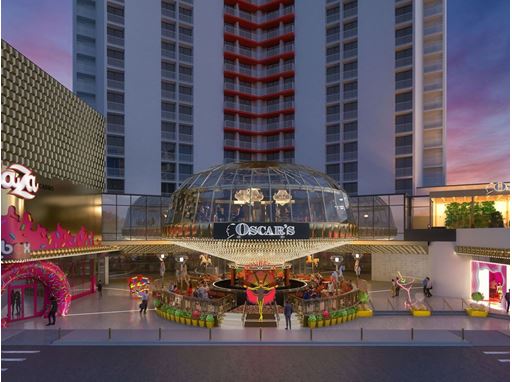 Plaza Hotel & Casino Unveils Four Projects to Transform its Iconic Main Street Façade and Dome
The Plaza Hotel & Casino recently unveiled details of four large-scale projects that will transform and reimagine its historic Main Street façade, including its porte-cochère, into a one-of-a-kind destination for cocktails, gaming, and dining. The four new projects include an animated Carousel Bar under the Plaza’s iconic dome, downtown’s first smoke-free, social media friendly gaming area, a rooftop patio at Oscar’s steakhouse, and the addition of the popular, Vegas-based Pinkbox Doughnuts. The Carousel Bar’s design preserves the dome’s iconic vintage Vegas lights that have been featured in many movies and shows over the years. The 2,500-square-foot outdoor venue will include an outdoor cooling system and seating for nearly 100 guests in booths, at the bar, and along its outer rail overlooking Main Street at the western entrance to the Fremont Street Experience. Adjacent to Carousel Bar will be downtown’s first smoke-free and social media friendly gaming space with the industry’s latest and most advanced slot machines, including the popular Brian Christopher Slots area that debuted last year at the Plaza. Oscar’s patio will be created on the rooftop deck above the new gaming space and be accessible via the restaurant’s existing lounge. The space will accommodate approximately 225 people and will offer the award-winning restaurant’s full dinner menu in addition to its extensive wine and cocktail lists. Pinkbox Doughnuts’ 1,200-square-foot store will feature a 16-foot-long glass doughnut display case and sell its full line of over 70 different flavors of doughnuts. The projects are expected to be complete by the end of the year. The Plaza and Oscar’s will remain open during construction. For more information, contact Amy E. S. Maier, The Warren Group, amy@twgpr.com.

Nellie’s Southern Kitchen Debuts at MGM Grand in Las Vegas
Nellie’s Southern Kitchen, a Jonas family experience honoring their matriarch’s timeless recipes, has officially opened the doors to its first West Coast location at MGM Grand in Las Vegas. Helmed by Denise and Kevin Jonas, Sr. – the parents of Kevin II, Joe and Nick (the Jonas Brothers) and Franklin – in partnership with TLI Bedrock LLC, Nellie’s welcomes guests to a seat at the Jonas family table with nightly live music, generous hospitality and timeless Southern comfort food. MGM Grand is the second restaurant location for Nellie’s Southern Kitchen, which began in Belmont, North Carolina. Nellie’s Southern Kitchen is a celebration of Nellie, Kevin Sr.’s grandmother, who lived in Belmont working in the cotton mills by day and cooking delicious meals for her loved ones by night. Nellie combined music and food into nightly rituals around the table, forging the tight-knit traditions the Jonas family continues to this day. For more information, contact Robert Flicker, Kirvin Doak Communications, rflicker@kirvindoak.com.

Jack Binion's Steak at Bally's Las Vegas Now Open
Jack Binion's Steak, the namesake restaurant of Las Vegas icon and gaming legend Jack Binion, is now open at Bally's Las Vegas. With the transformation to Horseshoe underway, the restaurant is an integral part of the resort's rebrand and honors the rich history and legacy behind the Binion and Horseshoe names. Jack Binion's steaks are selected from Black Angus corn-fed cattle for superior marbling and aged for 28 days. Not to be outdone, all steaks are finished on an 1,800-degree broiler to deliver a perfectly seared and seasoned centerpiece, making for a memorable Jack Binion's Steak dinner. For more information, contact Kala Peterson, Caesars Entertainment, kpeterson@caesars.com.

Mt. Charleston Lodge Introduces 'Pine Dining' Chef Dinner Series This Summer
Iconic Southern Nevada landmark, Mt. Charleston Lodge, launches an exclusive summer chef series on the mountain this July. Starting July 23, the site of the beloved Mt. Charleston Lodge will be transformed into Pine Dining: A Summer Chef Cookout Series. Hosted in an elevated temporary structure, the framework will feature panoramic windows for 360-degree views of the mountain, with access to indoor and outdoor seating. Pine Dining will provide a way to celebrate memories of the Lodge and make new ones before the rebuild begins, bringing the community together on the mountain once again. For more information, contact Courtney Fogle, Authentic Public Relations, courtney@authenticpublicrelations.com.

Billy Idol to Return to The Chelsea Inside The Cosmopolitan
The Cosmopolitan of Las Vegas welcomes back rock icon Billy Idol for a five-show run, Nov. 11, 12, 16, 18 and 19. The highly anticipated announcement comes on the heels of a successful, sold-out residency at the resort in 2021 as well as standout Las Vegas shows in 2020. For forty-five years, Billy Idol has been one of the faces and voices of rock’n’roll. He has sold 40 million albums while scoring numerous platinum albums worldwide, nine Top 40 singles in the U.S. and 10 in the U.K. including “Dancing With Myself, “White Wedding,” “Rebel Yell,” “Eyes Without A Face,” “Flesh For Fantasy” and “Cradle Of Love.” For more information, contact Eirianne Kennelley, Kirvin Doak Communications, thecosmopolitan@kirvindoak.com.

Diana Ross Makes Triumphant Return to Encore Theater at Wynn Las Vegas with Six-Show Run This Fall
Wynn Las Vegas is excited to announce the return of iconic singer Diana Ross this fall. Ross will once again take over the Encore Theater at Wynn Las Vegas with a six-show engagement on Sept. 21, 23-24, 28, 30 and Oct. 1, 2022. Following dozens of sold-out performances at Encore Theater, Ross will present her multiple decades of celebrated hits, and fans can expect the glamorous fashions and vibrant sets Ross is known for with each show. Ross’ legendary career in the entertainment industry spans more than 50 years and includes successes in music, film, television, theater and fashion. Among countless accolades, Ross is a multi-time American Music Awards winner, has been inducted into the Rock & Roll Hall of Fame, and in 2012 received the GRAMMY Awards' highest recognition: the Lifetime Achievement Award. For more information, contact Amanda Cripe, Giant Noise, amanda.cripe@giantnoise.com.

“Princess Diana: A Tribute Exhibition” To Debut In Las Vegas This August Inside The Shops At Crystals
After years of extensive research and detailed planning, exhibit organizers are proud to announce the August opening of “Princess Diana: A Tribute Exhibition.” The 10,000-square-foot royal exhibit will assume long-term permanent residency inside The Shops at Crystals on the Las Vegas Strip. The exhibition has been designed to transport visitors effortlessly into the life of world-famous royalty through the designer fashions, personal effects and historic items of the “People’s Princess” and family and friends important in her life. The exhibition is created and produced by SBX Group and SEE Global Entertainment in partnership with Pink Ribbons Crusade, a 501(c)(3) all-volunteer charity sharing its multi-million-dollar collection of Diana artifacts and royal family memorabilia to raise funds to fight breast cancer. Organizers worked to curate the exhibit from a collection of Diana and British royal memorabilia considered by many to be the world’s most comprehensive – a collection that has taken the internationally respected charity more than 45 years to assemble. For more information, contact Desiree Vontur, The Vox Agency, desiree@thevoxagency.com.

Sting Extends Critically-Acclaimed Las Vegas Residency “My Songs”
Seventeen-time GRAMMY Award winning musician Sting has extended his critically-acclaimed Las Vegas residency, “My Songs,” at The Colosseum at Caesars Palace with six new dates: April 1, 2, 5, 7, 8 and 9, 2023. Produced by the Cherrytree Music Company, Live Nation and Caesars Entertainment, “My Songs” presents a compendium of Sting’s most beloved songs with dynamic, visual references to some of his most iconic videos and inspirations. Throughout the show, the world-renowned musician treats fans to an array of greatest hits spanning his illustrious career, including “Roxanne,” “Message In A Bottle,” “Every Little Thing She Does Is Magic,” “Every Breath You Take” and several other fan favorites, plus new songs from his latest album, The Bridge. For more information, contact Kelly Frey, KF Publicity, kelly@kfpublicity.com.

Luke Bryan Adds Six New Show Dates to Headlining Engagement at Resorts World Theatre
Due to an overwhelming ticket demand for Luke Bryan’s headlining engagement “Luke Bryan: Vegas” at Resorts World Theatre, the country music superstar has added six more show dates in November and December 2022, including performances coinciding with National Finals Rodeo. Show dates: Nov. 30 and Dec. 2, 3, 7, 9 and 10. “Luke Bryan: Vegas” debuted this past February with a high-energy opening run that had Bryan working the theatre and interacting with fans. The show features only-in-Las Vegas production elements including a shifting stage that lifts the five-time Entertainer of the Year and his band to the rhythms of his hit songs as well as a catwalk that descends from the ceiling and elevates Bryan to eye-level with the mezzanine seats. For more information, contact Nick Flynn, Allied Global Marketing, ResortsWorld@alliedglobalmarketing.com.