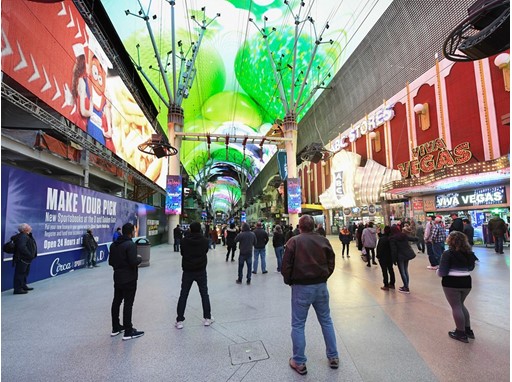 Fremont Street Experience Unveils Stunning New Graphics and Upgraded Viva Vision Canopy
Downtown Las Vegas lit up on New Year’s Eve when Fremont Street Experience debuted an entirely new collection of stunning visuals and 3D graphics created exclusively for its $32 million renovation of Viva Vision, the world’s largest single video screen. By fusing Watchfire Signs’ cutting-edge technology with Contend’s innovative graphics, the jaw-dropping content exploits 49.3 million LEDs alongside a state-of-the-art, 600,000-watt, concert-quality sound system. A highlight of the innovative content is the multi-sensory signature show, “MIXology.” The groundbreaking show concept was inspired by “synesthesia,” a perceptual phenomenon where music, art and emotion collide to create an immersive, multi-sensory experience on a grand scale. Spanning five city blocks above one of the most vibrant streets in Las Vegas, the revitalized canopy illuminates the pedestrian mall with 16,433,152 pixels and 5,000 Nits, making it seven times brighter than the previous canopy with four times the resolution allowing the screen to be seen 24 hours a day for the first time in its existence. For more information, contact Cassandra Down, Kirvin Doak Communications, cdown@kirvindoak.com.

Bellagio's Mayfair Supper Club Celebrates America's Appetite for the Spectacular
Vanilla-smoked chocolate cigars, towering seafood displays and the world’s finest cuts of meat will greet guests dining fountain-side at The Mayfair Supper Club, which opened at Bellagio on New Year’s Eve. The Mayfair will satisfy Americans’ appetite for the extraordinary through a culinary program that transports guests to the glamorous supper club world of yesteryear when music and cuisine intertwined for an unforgettable, all-night experience. For more information, contact Robert Flicker, Kirvin Doak Communications, rflicker@kirvindoak.com.

Shania Twain Launches Shania Twain “Let’s Go” The Las Vegas Residency
The top-selling female country artist of all-time, Shania Twain, recently debuted her new headlining residency show, Shania Twain “Let’s Go!” The Las Vegas Residency, at Zappos Theater at Planet Hollywood Resort & Casino. Twain returns to Zappos Theater in March 2020. Designed exclusively for Zappos Theater and promoted by Live Nation and Caesars Entertainment, the spectacular, high-energy production is a compilation of Shania's most celebrated hits including "Man! I Feel Like A Woman!," "You're Still The One," and "That Don't Impress Me Much," and features a seven-piece band and eight male dancers. For more information, contact Robert Jarrett, Caesars Entertainment, rjarrett@caesars.com.

ZZ TOP Return to The Venetian Resort Las Vegas
Following a wildly successful sold-out run in 2019, ZZ TOP recently announced it will return to The Venetian Theatre inside The Venetian® Las Vegas for a five-show limited engagement in 2020. The shows will be held on March 20, 21, 25, 27 and 28. ZZ TOP, the Rock and Roll Hall of Fame Texas trio, a/k/a “That Little Ol’ Band From Texas,” lay undisputed claim to being the longest running major rock band with original personnel intact. Of course, there are only three of 'em – Billy F Gibbons, Dusty Hill, Frank Beard -- a remarkable achievement remaining together through 5 decades of rock, blues, and boogie on the road and in the studio. For more information, contact Kelly Frey, The Publicity Lab, kelly@thepublicitylab.com.

AREA15 to Offer Curated Culinary Experience by Todd English
AREA15, the world’s first purpose-built, experiential art, retail and entertainment complex opening in Las Vegas in 2020, recently announced its partnership with Todd English, one of the most decorated and respected chefs in the world. The culinary-concept will offer a customized menu created by English exclusively for AREA15’s food hall (the official name to be announced in early 2020). Offering an immersive, multi-dimensional journey, guests will dine casually among large-scale art installations, music, performance and other activations. For more information, contact Desiree Webb, The Vox Agency, desiree@thevoxagency.com.

ICEBAR at The LINQ Promenade Celebrates Grand Opening
ICEBAR, a brand-new project created by Noel Bowman of Minus5 Ice Experience, recently celebrated its Grand Opening at The LINQ Promenade. ICEBAR offers the unforgettable frozen ambience and frosty cocktails familiar to fans of Minus5, while also featuring new, immersive features such as dynamic projection mapping. ICEBAR at The LINQ Promenade encompasses 1,200 square feet kept at 23-degrees Fahrenheit and made from nearly 100 tons of ice shipped to Las Vegas from Canada and Minnesota. Twelve professional ice carvers worked around-the-clock to construct the ice bar out of 650 blocks of ice, creating stunning sculptures to fill the space, as well as a 10-foot-by-10-foot operational bar. For more information, contact Vanessa Thill, The Vox Agency, vanessa@thevoxagency.com.

Earth, Wind & Fire Celebrates 50 Years in Entertainment with Residency at The Pearl
Earth, Wind & Fire are a music institution. A year-long celebration in 2020 will mark their 50th anniversary in entertainment, which is being emphasized with an intimate five-date run titled “Earth, Wind & Fire: Live in Las Vegas” inside The Pearl at Palms Casino Resort. The internationally renowned vocal group will perform May 6, 8-9 and 15-16, 2020. During these five decades, Earth, Wind & Fire have scored eight number one hits and have sold more than 100 million albums worldwide. They’ve released 23 albums, eight of which went Double Platinum and hit the Top 10, making them one of the best-selling artists of all time. They’ve won an impressive nine GRAMMY Awards including one for Lifetime Achievement (2012). In 2000, Earth, Wind & Fire was inducted into the Rock and Roll Hall of Fame, cementing their lasting impact on popular music. For more information, contact Alissa Kelly, PR Plus, alissa@prpluslv.com.

Las Vegas Motor Speedway named Speedway of the Year for record sixth time
For the third consecutive year and sixth time overall, Las Vegas Motor Speedway has been named Speedway Motorsports’ Speedway of the Year. The diverse motorsports facility was chosen as Speedway of the Year from among eight state-of-the-art Speedway Motorsports entertainment complexes. The award was presented to Las Vegas for the best overall performance during 2019 in such aspects as fan friendliness, attendance, financial performance, sponsor relations and creativity. Under the leadership of President and General Manager Chris Powell, Las Vegas Motor Speedway hosted two tripleheader NASCAR event weekends in 2019 including the September kickoff to the NASCAR playoffs, as well as two NHRA national events and an immensely successful Electric Daisy Carnival in May that attracted more than 135,000 attendees per night. For more information, contact Neal Reid, LVMS Media Relations, nreid@lvms.com.

Legendary Rock Band The Who Announce Six Shows at Caesars Palace
Legendary rock band The Who have announced they’ll be moving on in 2020 with more tour dates. Not quite ready to close the books on their acclaimed MOVING ON! TOUR, singer Roger Daltrey and guitarist/songwriter Pete Townshend pair with local symphony orchestras across North America for a once-in-a-lifetime rock experience, as hailed by critics. The band will return to The Colosseum at Caesars Palace for a series of six shows May 5, 7, 9, 12, 14 and 16, 2020. For more information, contact Robert Jarrett, Caesars Entertainment, rjarrett@caesars.com.

Drag Diva Brunch to Open at House of Blues Restaurant & Bar
Grab your wig and walk down the runway to House of Blues Restaurant & Bar for Las Vegas’ best, most fun and hilarious brunch. America’s No. 1 Drag Brunch, Drag Diva Brunch, opens Jan. 11, 2020 with a variety of over-the-top performers, luscious libations and the Big and Beautiful Diva all-you-can-eat brunch buffet. The divas take the stage every Saturday, Jan. 11 – April 4 at 11 a.m. Now in its fourth year, Drag Diva Brunch features an all-star cast of queens, as well as guest stars from “RuPaul’s Drag Race.” The hilarious brunch features new and fun weekly themes including tributes and parodies of Britney to Madonna, Harry Potter to Carrie Bradshaw, Disney to Broadway, and everything in between giving audiences different experiences every single weekend. For more information, contact Michelle Wilmoth, PR Plus, michelle@prpluslv.com.

Reba, Brooks & Dunn Announce 2020 Show Dates for “Together in Vegas”
Country music icons Reba McEntire, Kix Brooks, and Ronnie Dunn announce new dates for their hit residency at The Colosseum at Caesars Palace. The 2020 return of “REBA, BROOKS & DUNN: Together in Vegas” marks a fifth year for the longest-running country residency in Las Vegas. “REBA, BROOKS & DUNN: Together in Vegas” is a culmination of the friendship and musical admiration the trio has shared since first touring together in 1993 and features more than 30 action-packed hits backed by a band of 10 players from both of their touring crews. The 24 performances are set for April, June, October and December 2020. For more information, contact Kelly Frey, The Publicity Lab, Kelly@thepublicitylab.com.