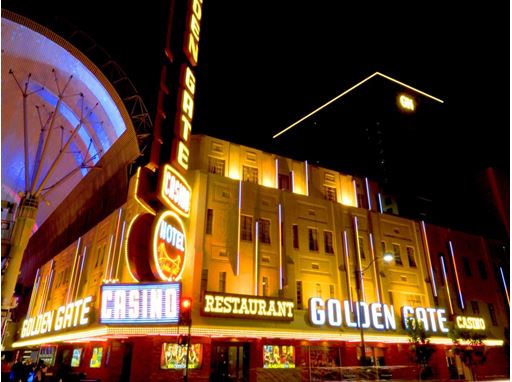 Legendary Band Chicago to Return to The Venetian Resort in September
Due to popular demand, one of the most successful and critically acclaimed rock bands of all time – Chicago – recently announced it will return to The Venetian Theatre inside The Venetian® Resort Las Vegas in 2021 for the fourth year in a row for a three-show limited engagement. The shows will be held on September 15, 17 and 18, 2021 at 8 p.m. Hailed as one of the "most important bands in music since the dawn of the rock and roll era," the legendary rock and roll band with horns, Chicago, came in as the highest charting American band in Billboard Magazine's Top 125 Artists Of All Time. And Chicago is the first American rock band to chart Top 40 albums in six consecutive decades. For more information, contact Kelly Frey (Live Nation), The Publicity Lab, kelly@thepublicitylab.com.

Golden Gate Celebrates 115 Years in Las Vegas
In January, Golden Gate Hotel & Casino celebrated 115 years of history. As the first hotel and casino in Las Vegas, the property has played a pivotal role in the evolution of the city’s hospitality and gaming industries. The downtown hotel was a landmark during the Roaring 20s and was a popular hangout for Frank Sinatra, Sammy Davis Jr., and Dean Martin. The hotel also debuted many of the town’s firsts – including Las Vegas’ first telephone with the phone number “1” and some of the first electric signs along Fremont Street Experience. Located at 1 Fremont Street, Golden Gate has kept its vintage Vegas charm by offering guests the chance to take a step back in time with the preservation of 10 of its rooms from the original incarnation of the property. The casino also is home to a museum-like collection of artifacts in the lobby including a 1907 registration book, replica of the first phone, Prohibition-era booze bottles hidden in the walls and found during later renovations, old gaming records and much more. For more information, contact Kara Rutkin, Kirvin Doak Communications, krutkin@kirvindoak.com.

Museum of Dream Space at Grand Canal Shoppes is Now Open
Museum of Dream Space, a popular multi-media art gallery, recently opened its first Nevada location inside Grand Canal Shoppes at The Venetian® Resort Las Vegas. Frequently abbreviated as MoDS, this one-of-a-kind destination is now open to the public and welcomes customers to experience an out of this world, interactive experience while also being able to safely capture pictures to last a lifetime. Offering an immersive world of culture and creativity, MoDS Vegas welcomes guests to adventure through five breathtaking rooms filled with state-of-the-art technology and structural design. As guests make their way through the space they will find themselves surrounded by pure luxury in The Gold Room, a structural beauty entirely made up of abstract gold finishes; then magically taken away to the ethereal Moon Room, a favorite from the Beverly Hills location that is sure to wow any social media follower; and enveloped by an electrifying experience in the next room which features vibrant floating bulbs filled with glowing electricity, and so much more. For more information, contact Alex Ladwig, Allied Global Marketing (for Grand Canal Shoppes), aladwig@alliedglobalmarketing.com.

The Mob Museum Launches Self-Guided Audio Tour
The Mob Museum, the National Museum of Organized Crime and Law Enforcement, launches a self-guided audio tour taking guests on an auditory journey through and beyond the Museum’s four floors of exhibits. This new resource provides an eye-opening deep dive into some of Mob history’s most fascinating events and personalities. With a running time of up to 85-minutes, the tour offers more than 40 audio stops featuring intriguing tales narrated by long-time Museum volunteers, as well as insider anecdotes from former Mob defense attorney and Las Vegas Mayor Oscar Goodman. The audio tour allows guests to select the length of their experience with the ability to start or stop any time, whether they seek just the tour highlights or want to dig deeper. For more information, contact Desiree Webb, The Vox Agency, desiree@thevoxagency.com.