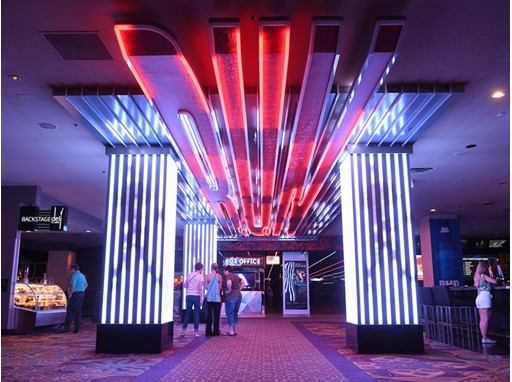 The Las Vegas Convention and Visitors Authority (LVCVA) recently began tunneling the future of transportation in Las Vegas as Elon Musk’s The Boring Company (TBC) began work on the Las Vegas Convention Center (LVCC) underground people mover to transport convention attendees throughout the 200-acre campus. This is the first commercial endeavor for TBC and one more first for Las Vegas. The boring machine is currently 40 feet below ground and the engines were turned on for the first time on Nov. 15, 2019. The boring machine can carve out 100 feet per day. With planned upgrades, TBC hopes to increase that pace during the LVCC underground people mover’s development. For more information, contact Lori Kraft, LVCVA, lkraft@lvcva.com.

GRAMMY Award-winning global superstar Kelly Clarkson has announced that she will be headlining a brand-new Las Vegas residency, Kelly Clarkson: Invincible, opening on Wednesday, April 1 at Zappos Theater at Planet Hollywood Resort & Casino. Designed exclusively for the Zappos Theater at Planet Hollywood Resort & Casino, Kelly and her longtime band will immerse fans in a one-of-a-kind up-close music experience that rocks through her nearly two-decade long catalog of award-winning smash hits. Clarkson will also offer VIP Experiences that bundle premium tickets with exclusive show perks like a stage-side bar. A limited number of meet and greets will also be available for purchase. For more information, contact Kelly Frey, The Publicity Lab, Kelly@thepublicitylab.com.

The Las Vegas Aviators® professional baseball team of the Pacific Coast League (PCL), Triple-A affiliate of the Oakland Athletics and 2019 Pacific Southern Division Champions, recently announced the schedule for the 2020 Big League Weekend at Las Vegas Ballpark®. Las Vegas Big League Weekend is back!  In 2019, BLW took a one-year hiatus due to construction deadlines and completion of the Las Vegas Ballpark for the PCL season which began in April. The Cleveland Indians will face the Oakland Athletics on Saturday-Sunday, February 29 – March 1. Game times for the Spring Training series are at 1:05 p.m. (PT). The Cincinnati Reds will then face the Chicago Cubs in a two-game series on Saturday-Sunday, March 7-8 at 1:05 p.m. (PT). For more information, contact Jim Gemma, Las Vegas Aviators, jgemma@aviatorslv.com.

Life Is Beautiful recently announced its highly anticipated return to Downtown Las Vegas – Friday, Sept. 18 through Sunday, Sept. 20 – for the 2020 edition of Las Vegas’ premier music, arts, culinary and comedy festival. For the eighth year in a row, Life Is Beautiful will take over 18 city blocks of the urban streets of Downtown Las Vegas for three nights of unparalleled talent, world-renowned culinary offerings, experiential artists and more. For more information, contact LIB@KirvinDoak.com.

The first nonstop LEVEL flight from Paris to Las Vegas arrived at McCarran International Airport on October 30, 2019 with a water arches salute. LEVEL, the low-cost long-haul airline from IAG and sister airline to Aer Lingus, British Airways and Vueling, will operate two nonstop flights per week on Wednesday and Sunday. LEVEL has the Airbus A330-200 based in Paris Orly, configured with 293 seats in Economy and 21 Premium seats. On board, each passenger has a plug or USB socket, a high-definition digital screen with complimentary films and TV shows, high-speed WiFi, and a complete catering offer. For more information, contact Heidi Hayes, Las Vegas Convention and Visitors Authority, hhayes@lvcva.com.

Ellis Island Casino Hotel & Brewery, a veritable Vegas landmark for more than 50 years, is thrilled to announce the highly-anticipated opening of The Front Yard, the property’s new beer garden, restaurant and entertainment venue, on Friday, Dec. 6, 2019. Situated along Koval Lane, the two-story venue offers a casual brewpub atmosphere with a premium bar and full-service restaurant showcasing Ellis family favorite recipes such as house-cured bacon and brisket, and dishes incorporating craft beers from its own Ellis Island Brewery. The Front Yard will also feature a variety of brews straight from Ellis Island Brewery to the tap, serving fresh beers that rotate seasonally. For more information, contact Hillary Smoot, Red Moon PR,hillary@redmoon88.com.

Vegas Golden Knights Chairman and CEO Bill Foley recently announced the Golden Knights and BT SUPPLIES WEST INC have signed a long-term partnership agreement to name the new Vegas Golden Knights community arena in Henderson, Nevada where BT Supplies West Inc. maintains its corporate headquarters. The new facility will officially be named “Lifeguard Arena in Henderson.” As part of the agreement, BT Supplies West Inc., and its affiliated company L & M Foodservice Inc., two leading suppliers of a wide variety of disposable and reusable paper goods and janitorial supplies and equipment, will be rebranding both companies over the upcoming months, and both will be rebranded as Lifeguard Industrial and Home Supplies, in time for the planned grand opening of the new Vegas Golden Knights community arena. For more information, contact Sage Sammons, Vegas Golden Knights, sammons@vegasgoldenknights.com.

Charity and celebration go hand in hand at Las Vegas’ philanthropic event of the year, Mondays Dark. Raise a glass and celebrate their 6th Anniversary on Monday, Dec. 9 at the Pearl Concert Theater inside Palms Casino Resort. This anniversary event also celebrates hitting the $1 million mark of raising funds for Las Vegas' philanthropic organizations. Mondays Dark will announce the 2020 charity lineup at the anniversary event, with another 21 local charities in store. 2020 will be a monumental year for Mondays Dark, as the event surpasses the $1 million raised for Las Vegas non-profits. For more information, contact Michelle Wilmoth, PR Plus, michelle@prpluslv.com.

Five-time Grammy® Award winner CeeLo Green will return to the Las Vegas Strip to perform a limited engagement at Flamingo Las Vegas. The entertainer will take the stage starting March 24, 2020. Featuring live musicians, “CeeLo Green: Man In The Mirror” will highlight songs from the artist’s incredible repertoire including “Forget You” and “Crazy” alongside unique takes on hits from the past few decades. The 16 performances are set for March, April and August 2020. For more information, contact Robert Jarrett, Caesars Entertainment, RJarrett@caesars.com.

Sing your heart out at KAMU – Ultra Karaoke, the first high-end karaoke club on the Las Vegas Strip and the most ‘note’-able in the world. Boasting an unrivaled experience with the ultimate in luxury and technology, KAMU is how Vegas does karaoke. Get ready to be the next rock star or pop sensation in the comfort of KAMU’s private, upscale singing suites beginning in early February 2020 at the Grand Canal Shoppes at The Venetian Resort Las Vegas, in the Palazzo Tower. For more information, contact Michelle Wilmoth, PR Plus, michelle@prpluslv.com.

Lights FC recently announced that United States soccer legend Eric Wynalda has signed a contract to remain as the team's manager for the 2020 USL Championship season. Las Vegas Lights Football Club improved in almost every statistical category during Wynalda's first year as a head coach in the league, narrowly missing out on a playoff berth. Under Wynalda's leadership, Las Vegas became one of the best home teams in the Western Conference by winning 9 games at Cashman Field in 2019. Defensively the Lights ranked as the ninth-best in the West after being the fourth worst (out of 33 teams) in USL during the team's inaugural year. For more information, contact Harry Ruiz, Las Vegas Lights FC, harry.ruiz@lasvegaslightsfc.com.

Celebrated Chef Pierre Gagnaire will visit Twist at Waldorf Astoria for a special dinner in honor of the restaurant’s 10-year anniversary. Perched on the 23rd floor of Waldorf Astoria Las Vegas, Twist by Pierre Gagnaire will commemorate its tenth anniversary in grand fashion with a special menu prepared by Michelin Star Chef Pierre Gagnaire himself. For two days only, January 3-4, join Chef Gagnaire for the exclusive Diamond Anniversary Dinner at the chef’s first and only restaurant in North America. Inspired by Twist’s first menu, the six-course journey will feature a trio of langoustine, Chef Gagnaire’s signature zezette bouillon with multi colored gnocchi and a roasted venison saddle with juniper and grand veneur ice cream. Guests can also indulge in an optional champagne pairing offered by Moet Hennessy. Menu is $250 per person, exclusive of champagne pairing, tax & gratuity. For more information, contact Erica Johnson, Waldorf Astoria, erica.johnson@waldorfastoria.com.

Witkoff has named Bobby Baldwin, renowned gaming executive, as Vice Chairman of Witkoff and Chief Executive Officer of Drew Las Vegas, a 67-story resort and casino in development on the Las Vegas Strip. Baldwin assumed his new role immediately. Partnering with a highly respected industry leader signals Witkoff’s commitment to the long-term success of Drew, which will set the standard for next-generation Las Vegas luxury, and to the destination overall. With nearly 3,800 rooms, the resort will introduce a truly unique take on the Las Vegas experience, featuring a state-of-the-art casino, an innovative collection of restaurants, shops, and pools, vibrant nightlife options, and groundbreaking spa and wellness offerings. For more information, contact Amy Rossetti, Rossetti Public Relations, witkoff@rossettipr.com.