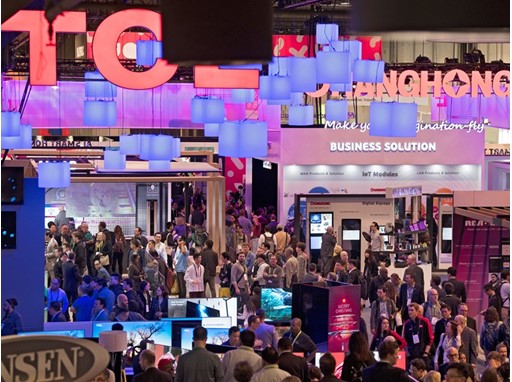 LAS VEGAS -- Once again, Las Vegas maintains its long-standing reputation as the leading destination for business travel. For the 24th consecutive year, Las Vegas was named the country’s No. 1 trade show destination according to the Trade Show News Network (TSNN) “2017 TSNN Top Trade Shows in the United States” list. According to the list, Las Vegas hosted 47 of the largest shows held in the country last year.
“Las Vegas has long been considered a top destination for business travel and 2017 proved to be another astounding year,’ said Rossi Ralenkotter, CEO of the Las Vegas Convention and Visitors Authority. “Last year, a record-breaking 6.6 million people traveled to the destination for business and with a number of high-profile projects like the Las Vegas Convention Center District in the works, in addition to new meeting and convention space being added across the destination, Las Vegas is well-positioned to continue the momentum for decades to come. It’s an incredible honor to top TSNN’s coveted ‘Top Trade Shows in the United States’ list for the 24th consecutive year and we look forward to welcoming more shows to Las Vegas in the future.”
The coveted list by TSNN represents the largest trade shows held in the country each year, ranked by net square footage. According to TSNN’s rankings, CONEXPO-CON/AGG 2017 secured the top spot with more than 2.67 million square feet of exhibit space 128,000 attendees and 2,375 exhibitors.
Coming in at the No. 2 spot on the list was the Consumer Technology Association’s CES 2018. The January show spanned 2.6 million net sq. ft., also at the Las Vegas Convention Center and other venues in the city, and drew more than 182,000 attendees.
“It's no surprise that once again Las Vegas snagged the top spot for city with the most 2017 TSNN Top Shows held in it," said Tarsus Media President Rachel Wimberly. "Las Vegas' mix of venues, hotels, entertainment, cuisine, gaming and much more is an unparalleled offering in the trade show industry."
Las Vegas’ closest competitor was Orlando with 24 shows, followed by Chicago at No. 3 with 21, and Atlanta at No. 4, hosting 20 shows. To see the full TSNN list, visit http://www.tsnn.com/toplists-us.
The LVCVA is committed to maintaining the destination’s top spot on TSNN’s list. In October 2016, the Nevada State Legislature approved legislation to help fund the expansion and renovation of the Las Vegas Convention Center. The Las Vegas Convention Center District (LVCCD) project, which celebrated a groundbreaking in January 2017, will add 600,000 square feet of exhibit space, new meeting rooms and other amenities, as well as renovating the entire existing property. The project will continue to cement Las Vegas as North America’s premier business destination, allowing shows to grow in both square footage and attendance.
In addition to the landmark LVCCD project, confidence in this industry sector is supported by more than $15 billion in destination-wide investment in renovating and developing over 2.8 million square feet of new meeting facilities throughout the Las Vegas area.
On April 12, 2018, leaders from across the meetings and events industry will come together to support the second annual Global Meetings Industry Day (GMID). Las Vegas will join destinations across the globe in celebrating GMID to demonstrate the measurable impact that meetings have on businesses, economies, and communities.
Las Vegas Meetings Snapshot: