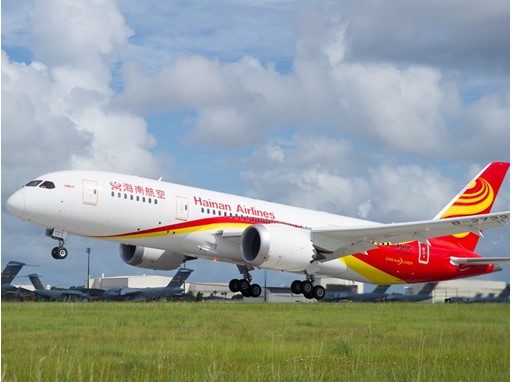 Las Vegas – December 2 marks the one-year anniversary of Hainan Airlines’ inaugural nonstop flight from Beijing to McCarran International Airport in Las Vegas. This historic route connects mainland China to Las Vegas and introduces the destination to millions of prospective visitors.  With China considered to be a top emerging growth market for Las Vegas visitation, the accessibility and convenience of the nonstop service is instrumental to increase international visitation.
Since the launch, the Las Vegas Convention and Visitors Authority (LVCVA) has continued to foster a successful partnership with Hainan Airlines. This year, the LVCVA is conducting a series of meetings with the airline and hotel partners from the destination to expand direct working partnerships and explore business possibilities.
The LVCVA continues to aggressively promote Las Vegas as the premier tourism destination in the world and has increased efforts directed toward the Chinese travel industry to promote the Entertainment and Meetings Capital of the World.  Visitation from China has steadily increased over the past several years including a nearly 13 percent jump in 2016.  Las Vegas welcomed record-breaking visitation of 42.9 million guests overall to the destination, with 19 percent international. China recorded the most visitors in history with more than 233,000 guests traveling to Las Vegas.
Las Vegas maintains its long-standing reputation as the leader for business travel and has been the No. 1 trade show destination, according to the Trade Show News Network (TSNN), for 23 years running. Trade show attendance from China has also increased. Las Vegas hosts 57 of the 250 largest shows held in the country every year, including the Consumer Technology Association’s CES. CES 2017 achieved record numbers with more than 2.6 million square feet of exhibit space across several Las Vegas convention facilities, welcoming more than 4,000 exhibiting companies and more than 184,000 attendees. China was the number two source of participants overall for CES in 2017, bringing in nearly 14,000 attendees. Chinese technology companies including DJI and Huawei are consistently present at CES and NAB, however other companies have joined the roster, including cell phone and internet company Xiaomi, which exhibited at CES for the first time in 2017.
The outbound travelers from China are constantly evolving, as 60 percent of visitors travel independently, compared to group travel which currently amounts to 40 percent, according to research by the China Tourism Academy.  Recognizing the shift in travel behavior, the LVCVA has begun to invest in marketing directly to consumers through different platforms. In partnership with Brand USA, the LVCVA has expanded promotional efforts on Fliggy (Alitrip) and Mafengwo and maintained existing partnerships with online travel agencies such as Ctrip.
In celebration of the direct nonstop route, Las Vegas conducted a consumer activation in Beijing at the Mall at Oriental Plaza on Thursday, Nov. 30. Beijing residents were given the opportunity to experience a taste of Las Vegas and win a trip to the destination.