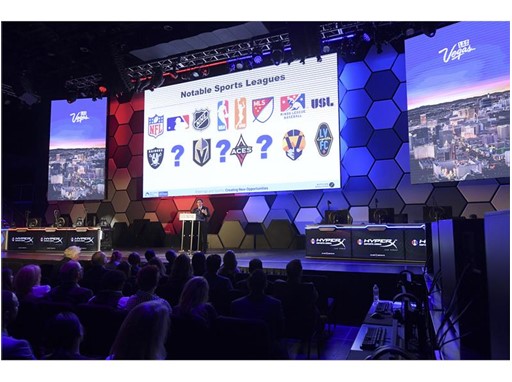 LAS VEGAS – The Las Vegas Convention and Visitors Authority (LVCVA) joined leaders from across the Las Vegas meeting and convention industry including Caesars Entertainment, The Cosmopolitan of Las Vegas, MGM Resorts International, The Venetian and The Palazzo and Wynn Las Vegas to celebrate Global Meetings Industry Day (GMID), or as Las Vegas likes to call it, Global Meetings IMPACT Day, on Thursday, April 4, 2019.
“When someone says we can’t, that’s when Las Vegas doubles down,” said Jeremy Aguero, Principal of Applied Analysis and keynote speaker during Las Vegas’s signature GMID event at the HyperX Esports Arena Las Vegas inside the Luxor Hotel & Casino. That was the sentiment echoed throughout the special event in celebration of the meetings, conventions and trade show industry, which attracted nearly 200 meetings industry leaders, professionals and media from across the world.
The day is especially important for Las Vegas as the industry has a significant impact on the local economy supporting 65,000 jobs and generating more than $9.8 billion in economic impact. The destination welcomed more than 6.5 million business travelers in 2018, and in the first two months of 2019, more than 1.4 million people have traveled to the destination for business.
“Las Vegas is undoubtedly a 24-hour destination and in that spirit, we are constantly innovating and evolving, and when it comes to meetings and conventions, it’s ‘Game On’! “, said Amy Riley, Senior Director of Business Development of the LVCVA and emcee of the GMID 2019 signature Las Vegas event. “Every year, we look forward to celebrating GMID and our partners around the world whose dedicated efforts drive business and support the economy.”
The LVCVA and industry partners recognize the importance of the meetings industry on GMID observance day and continues its resolve to evolve messaging surrounding the event to ‘Global Meetings IMPACT Day.’ The shift in verbiage is intended to amplify the valuable mission and purpose of the event which intends to educate the public about the wide-reaching positive impact face-to-face meetings have on global economies and driving business forward.
Trade Show News Network recently recognized Las Vegas as the No. 1 trade show destination in the country for the 25th consecutive year after hosting 48 of the largest trade shows in North America. In celebration of this milestone honor, the event kicked off with video remarks of support from some of Las Vegas’ top trade show partners including Karen Chupka of the Consumer Technology Association (CTA), Tom Gattuso of Specialty Equipment Market Association (SEMA) and Dennis Slater of Markets Association of Equipment Manufacturers (AEM). The Consumer Technology Association’s CES 2018 topped TSNN’s list of top trade shows with nearly 2.8 million square feet of exhibit space throughout the destination.
The Las Vegas convention industry is always booming, and during GMID 2019, the city is gearing up to host NAB Show 2019, which also made the list of TSNN’s largest Trade Shows. Chris Brown of the National Broadcasters Association addressed the crowd to communicate the importance of the trade show industry and why Las Vegas is a great fit for their annual event.
“Las Vegas has been the gold standard in trade show destinations for many years,” said Chris Brown, Executive Vice President, Conventions and Business Operations of the National Association of Broadcasters. ”If you’re in the trade show business and you want to be in the big leagues you know that you need to take your trade show to Las Vegas and it’s always been that way. No other city offers a comparable package of exciting amenities and facilities than Las Vegas.”
In addition to Las Vegas’ continued success as a top destination for business travel, the city is also rapidly emerging as a leading sports destination. A keynote address was issued by Jeremy Aguero of Applied Analysis highlighting how the meetings industry can capitalize on sports and major events to increase attendee engagement and participation.
Following the presentations, event guests were welcomed to interactive a networking event inside the HyperX Esports Arena Las Vegas, showcasing one of Las Vegas’ unique venues available for hosting creative and impactful events.
This year, Las Vegas amplified the educational profile of its signature GMID event by partnering with MeetingsNet and the Events Industry Council to provide one clock hour toward Certified Meeting Professional certification or re-certification in Domain A: Strategic Planning.
GMID is an observance launched by the Meetings Mean Business Coalition in an effort to showcase the real impact that business meetings, conferences, conventions, incentive travel, trade shows and exhibitions have on people, business and communities. Meetings Mean Business Coalition, an extension of U.S. Travel, provides resources to promote and defend the value of business meetings and travel on our economy. U.S. Travel continues to be a leading voice in reminding policymakers of the value of government meetings and travel under all fiscal environments.
With billions worth of investment and development projects announced or in the works throughout the destination, including the Las Vegas Convention Center District (LVCCD) Project and the addition of new meeting and convention space across the destination, Las Vegas is well positioned to maintain its position as North America’s No. 1 trade show destination for decades to come.
Las Vegas boasts more than 11.5 million square feet of meeting space in addition to a wide array of event, dining and entertainment venues that are also used for group business. More than 3 million additional square feet of meeting space is scheduled to go online within the next five years.
Las Vegas hosts nearly 24,000 meetings and conventions annually. One reason Las Vegas is a top choice year after year, is that there is always something new to see and experience. Our resort and business partners continually invest in improvements to keep the destination fresh and appealing to business travelers.
For more information about Las Vegas as a business destination visit www.VegasMeansBusiness.com. Assets and images from the Las Vegas signature GMID event can also be found at press.lvcva.com.