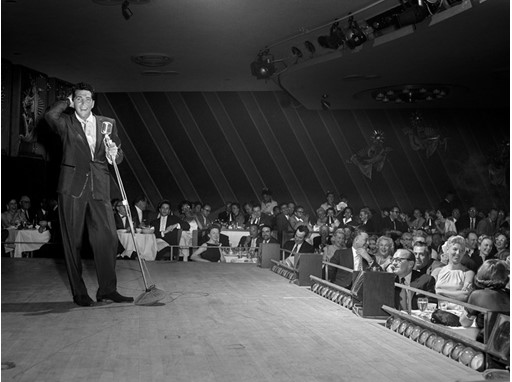 LAS VEGAS -- Elvis Presley once told Deana Martin, “They call me the King of Rock and Roll, but your dad is the King of Cool.”
From his solo career to his appearances with the Rat Pack and his infamous Celebrity Roasts, Dean Martin made the Las Vegas stage his home. Known for his smooth and effortless style, Martin has become a timeless Las Vegas icon. Dean Martin would have turned 100 on June 7. We celebrate the “King of Cool” with this tribute featuring photos and video from the Las Vegas News Bureau archives. In addition, the News Bureau has produced an exhibition in the Las Vegas Convention Center featuring exclusive photographs from its archives and rare Las Vegas memorabilia.
Featured photos include:
Dean Martin on the set of the movie, “My Friend Irma Goes West,” filmed at the Flamingo Hotel in Las Vegas. A sequel to "My Friend Irma," the movie was one of 16 films the famous Martin and Lewis team made together between 1949 and 1956.
Martin with Lucille Ball on the set of the special "Lucy Gets Lucky" at the MGM Grand in Las Vegas on Dec. 10, 1974. Martin had previously appeared in an episode of The Lucy Show, "Lucy Dates Dean Martin," which was Lucille Ball's favorite episode.
Martin at Paradise Valley Golf Course. Dean loved to play golf, and often carried a club with him. He was one of a group dubbed the “Gruesome Sixsome” who played at the Las Vegas Country Club nearly every day for six weeks when it opened in 1967.
The reunion Dean Martin and Jerry Lewis orchestrated by Frank Sinatra during the Jerry Lewis MDA Labor Day Telethon in 1976 at the Sahara Hotel in Las Vegas. Lewis recently told the News Bureau that this photo of the trio is one of his favorite. “Not a day goes by I don’t remember my partner with deep love!”
Martin onstage as a solo performer, and with the Rat Pack. Martin is known for hits such as “That’s Amore,” “Return to Me,” and “Volare.” His single “Everybody Loves Somebody” knocked The Beatles “Hard Day’s Night” out of its No.1 spot on the Billboard Hot 100 in 1964.
Martin hosted the The Dean Martin Celebrity Roasts in Las Vegas from 1974-1984 with a star-studded panel of roasters. “Many of these celebrities were friends who loved to give and take a good shot. The cigarettes were real, the drinks were free and the camaraderie was heartfelt,” touted a press release for the series.
Three video clips: The Rat Pack at the Sands, Jan. 1960 featuring Dean Martin, Frank Sinatra, Sammy Davis Jr., Peter Lawford and Joey Bishop. Dean Martin at the unveiling of the Scopitone at the Sands on 8/25/1964. Dean Martin at the opening of the MGM Grand 12/5/1973.
About the Las Vegas News Bureau:
Since 1947, the Las Vegas News Bureau has captured the sights and sounds of the world’s leading destination like no one else, and has played a unique role in promoting Las Vegas by capturing unforgettable images on film. The Bureau supports the Las Vegas Convention and Visitors Authority marketing efforts by photographing and filming concerts, sports events, and red carpets and distributing the images to news media around the world. We share our collection with the public through community exhibitions year round, while ongoing preservation efforts safeguard this rich and living archive of Las Vegas history for future generations. For a listing of community exhibitions, visit www.lasvegas.com/exhibits. Follow us on Twitter @LVNewsBureau