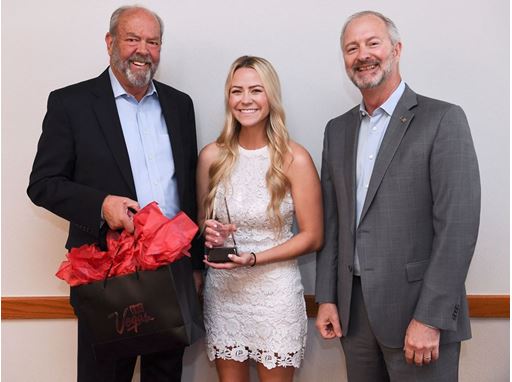 Samantha Fry, pool operations manager at Treasure Island Hotel & Casino, received the Hospitality Heroes Industry Award after an independent selection committee of local business leaders chose her out of a field of 130 nominations. The Hospitality Heroes program has garnered nominations from resorts and tourism-related businesses since its January launch. Online nominations for the third quarter will be accepted through July 26.

Fry started at Treasure Island in 2012 as a lifeguard at age 16 and has remained at the property for nearly a decade while earning her high school diploma and a bachelor’s degree at UNLV. She was promoted to a management position in 2016, overseeing the pool, cabanas and VIP guests. Fry’s colleagues describe her as dedicated, hardworking and an exceptional leader. She can commonly be seen delivering food and drink to sunbathers, helping clean up spills or performing lifeguard duties if needed. In her time at the pool, Fry has made two water rescues that required medical attention.

Tourism is Southern Nevada’s top economic driver, representing nearly 30 percent of overall employment in the state. The year-round Hospitality Heroes program was created to celebrate the accomplishments of an elite group of frontline hospitality workers while showcasing the resilience of the tourism industry.