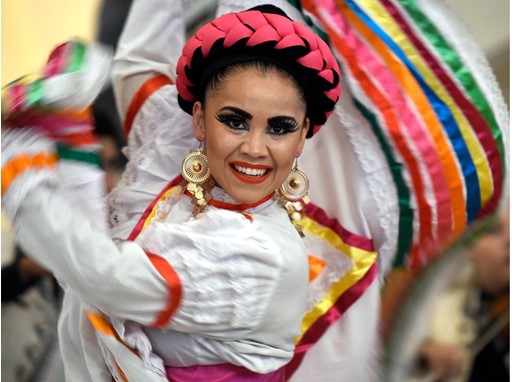 LAS VEGAS – Every September, the Entertainment Capital of the World invites visitors from around the world to celebrate Mexican Independence Day with a lineup of exciting events and world-class entertainment. Throughout Las Vegas, revelers can enjoy performances by remarkable headliners and sidesplitting comedians as well as championship boxing matches and lively celebrations during the 2019 El Grito festivities.
McCarran International Airport will kick off the bustling holiday weekend by welcoming passengers who have arrived directly from Mexico to Las Vegas with special performances by Mariachi Oro Del Rancho and Ballet Folklorico Sol de Rancho. From the Thursday before to the Monday after, 62 commercial flights will fly directly between Mexico and McCarran, including 18 flights added specifically for the holiday weekend.
Las Vegas has long been home to some of the most anticipated boxing matches and remains the No. 1 contender for high-profile fights. Boxing stars Tyson Fury and Otto Wallin will step into the ring to face off at T-Mobile Arena on Saturday, Sept. 14 for the lineal heavyweight title. This international championship fight comes less than three months since Tyson’s second-round destruction of Tom Schwarz at the MGM Grand Garden Arena. Now he defends his title against undefeated Wallin.
Hakkasan Group will host a weekend-long celebration in honor of Mexican Independence Day at its famed daylife and nightlife venues throughout the destination. From Sept. 12-15, the globally recognized venues will keep the party going with A-list entertainment including Calvin Harris, Zedd, DJ Irie, Tyga, Lil Jon and Tiësto; Latin-inspired celebrations and the second annual celebration of Deseo Latin Sundays, the only dedicated Latin nightclub experience on the Strip at OMNIA Nightclub inside Caesars Palace.
On Sept.13, Brooklyn Bowl Las Vegas at The LINQ Promenade brings Lucha VaVOOM with celebrity MC Drew Carey to the Strip. A fan-favorite in Los Angeles for 15 years, the show is a mix of Mexican luchador wrestling, burlesque shows and comedy sets – all in one place.
Downtown Container Park will celebrate El Grito with headlining entertainment by Metalachi, the world’s best heavy metal mariachi band, on Sept. 13. Keeping the party going, a plethora of park-wide specials will be available including cocktails from Oak & Ivy and fiesta-themed bites from Downtown Terrace and Big Ern’s BBQ. Festivities begin at 8 p.m. and admission is free.
The LINQ Promenade will celebrate Mexican Independence Day with a free concert on its Fountain Stage on Sept. 14. Festivities will include music by DJ Ethos, performances by Ballet Folklórico Sol Huasteco, and a headlining concert performance by bi-lingual hip-hop artist, producer and cultural voice, Olmeca. Additionally, over a dozen artists from Las Vegas will set up a pop-up “Art Bloq” from noon to midnight.
Kicking up the action, the United Soccer League’s Las Vegas Lights FC will face off against the Fresno Football Club during the Hispanic Heritage Night game on Sept. 14 at 7:30 p.m.
In commemoration of National Hispanic Heritage Month, Sam’s Town Hotel and Gambling Hall presents its free Hispanic Film Festival, happening every Saturday this September at the Century 18 Sam’s Town movie theater. Movie buffs can see celebrated foreign film “Cantinflas,” the untold story of the greatest and most beloved comedy film star in Mexico’s history, Sept. 14.
Divas Mexicanas, a spectacular Mexican Independence Day show with a full mariachi band featuring Carmen Jara, Mary Boquitas and Cristina Eustace will take over The Space, Sept. 14.
To complement the destination’s top-notch entertainment offerings, Las Vegas boasts an array of leading culinary experiences. Park MGM Las Vegas celebrates the holiday weekend with the grand opening of Mama Rabbit Mezcal + Tequila Bar, the newest addition to the Strip’s cocktail scene, boasting the country’s largest collection of mezcal and tequila. Actor and new Access Hollywood co-host Mario Lopez hosts the grand opening party Sept. 13, while musical performances by cultural DJ sensations DJ Crykit and Natalia & Esther keep the party going Sept. 14.
Cabo Wabo Cantina located inside Miracle Mile Shops at Planet Hollywood Resort & Casino will celebrate with an authentic Mexican platter, parrillada, made with BBQ pork ribs, carne asada, achiote chicken and chorizo, served with grilled onions, jalapeños, rice, beans and flour tortillas.
China Poblano at The Cosmopolitan of Las Vegas will offer locals a complementary Salt Air or Classic Margarita with the purchase of the Chef’s Tasting Menu throughout the weekend. Also at The Cosmopolitan, Ghost Donkey Mezcal & Tequila Bar takes over the North Bar at The Boulevard Pool on Sept. 14. Corona cervezas, three types of nachos and four cocktail options, Espadin Spritz, Burro Tropical, Milagro Paloma and Mushroom Margarita, will be available at the popup.
On Sept. 14 and 15, visitors can enjoy Mexican Independence Day-inspired brunch favorites and authentic live mariachi performances throughout the afternoon at Diablo’s Cantina at Luxor Hotel and Casino. ALIBI Ultra Lounge at ARIA Resort & Casino shakes up the weekend with $15 specialty cocktails including Hard Work with three different types of rum, Afternoon Delight with Grey Goose and Aloe Vera liquor and the tequila-based Freedom.
World-class Latin performers taking over iconic Vegas venues include:
To plan your unforgettable trip to Las Vegas visit www.VisitLasVegas.com.
###
About the LVCVA
The Las Vegas Convention and Visitors Authority (LVCVA) is charged with marketing Southern Nevada as a tourism and convention destination worldwide and also with operating the Las Vegas Convention Center. With nearly 150,000 hotel rooms in Las Vegas alone and more than 11 million square feet of meeting and exhibit space citywide, the LVCVA’s mission centers on attracting ever increasing numbers of leisure and business visitors to the area. Download the virtual reality app, Vegas VR, to experience Las Vegas from your iPhone or Android by visiting http://www.vrtv.vegas/. For more information, go to www.lvcva.com or www.visitlasvegas.com.