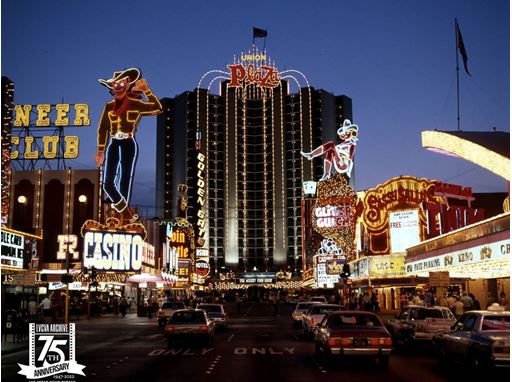 LAS VEGAS – The Las Vegas Convention and Visitors Authority (LVCVA) Archive Collection, which has documented Las Vegas’ history and helped promote tourism to Southern Nevada since 1947, will mark its 75th anniversary of its Las Vegas News Bureau collection by curating and presenting some of the most iconic photos of the collection to the public for the first time.

The collection began as part of the Las Vegas Chamber of Commerce in 1947 with the goal of promoting Southern Nevada and its offerings. Over the years, the collection became a valuable resource for the news media, movies, documentaries, and researchers with many images in the collection garnering worldwide acclaim. With more than 7 million images, 11,000 pieces of film and video, and 1,300-linear-feet of manuscripts and artifacts, the archive is estimated to be the largest and most comprehensive post-World War II collection of Southern Nevada imagery in the world. The collection is curated by a full-time archivist, who manages it and ensures it is preserved for future generations.

“For decades the Las Vegas News Bureau has played an integral role in promoting tourism to Las Vegas, documenting and sharing worldwide the sights and sounds of our dynamic city,” said Steve Hill, president and CEO of the LVCVA. “We are thrilled to showcase the iconic images that have become synonymous with Las Vegas.”

To honor the milestone, a 75th Anniversary Website features some of the most famous photos of the collection throughout the celebration beginning with the release of the 75 most iconic images, based on how frequently the photos have been requested and published. The first photo captured in the collection is also featured. Taken in Downtown Las Vegas on May 15, 1947, the photo captures Helldorado Days, a celebrated Western-themed festival that dates back to the 1930s. Additional photo collections, including Celebrities, Entertainment, Downtown, Then & Now, Sports, Implosions and more, will be released online regularly throughout the celebration. Other anniversary programming will include resort partner integrations, a social media campaign and special events.

In 1947, members of the Las Vegas Chamber of Commerce determined they needed to promote and market Las Vegas to increase tourism and created a fund to accomplish that goal. Known as the Livewire Fund, contributions were made by hotels and motels throughout Southern Nevada to create the Las Vegas News Bureau, which was charged with marketing Las Vegas as “The Entertainment Capital of the World.” In 1992, the Las Vegas News Bureau Collection was transferred to the LVCVA, where the collection continues to grow and be shared in marketing and promotional efforts.

“If it were not for the Las Vegas New Bureau, essential elements of the visual history of Las Vegas starting in the late 1940s would not have been recorded and, just as important, preserved,” said Bob Stoldal, retired television news executive and Las Vegas historian. “From its group of talented film and still photographers, the archives of the News Bureau continue to provide a unique record of the development of Las Vegas, as well as Southern Nevada. History comes alive thanks to the Las Vegas News Bureau.”