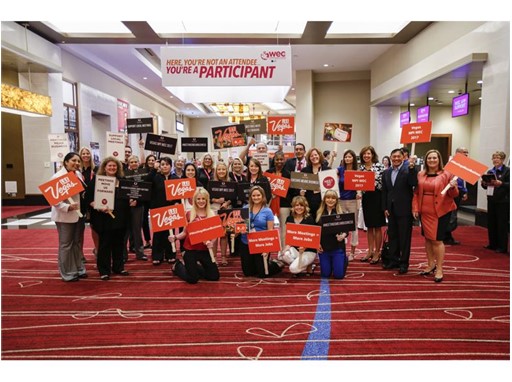 LAS VEGAS – When we meet, we change the world! The meetings industry is a critical economic driver supporting 1.8 million American jobs and contributing $280 billion to the U.S. economy. To draw attention to this critical economic driver, the Las Vegas Convention and Visitors Authority (LVCVA) partnered with key meetings industry stakeholders to stage a high-energy demonstration in support of the meetings industry during Meeting Professionals International World Education Conference 2016 (MPI WEC 2016) in Atlantic City, NJ.

The LVCVA, MPI, Meet AC, Caesars Entertainment, MGM Resorts International and dozens of volunteers from a variety of organizations gathered to rally support for the meetings industry while inspiring and energizing participants of the annual meeting planners conference. On the morning of June 14, MPI WEC 2016 participants were greeted by event organizers and volunteers holding signage with messaging in support of the meetings industry. A number of participants stopped to take photos and learn more about the collaborative initiative.

“MPI WEC 2016 aimed to inspire attendees to think outside of the ordinary when planning meetings and Las Vegas was up to the challenge and happy to reach out to our partners to create a memorable event,” said Cathy Tull, senior vice president of marketing at the LVCVA. “The meetings industry means so much to all of us at the conference so rallying together - as one industry and not as competitors- in support of meetings business was a natural fit.”

In addition to the surprise activation, the LVCVA hosted the MPI WEC 2017 Preview Lunch later that afternoon. Lunch attendees received a glimpse of what they’ll experience at MPI WEC 2017, when Las Vegas plays host to the event in June at the MGM Grand.

Welcome remarks were delivered by LVCVA Senior Director of Business Sales, Amy Riley, who shared important destination updates. The presentation included video of Las Vegas history in the making, as the destination bid farewell to one tower of the iconic Riviera Hotel & Casino property with an implosion that took place earlier that day at 2:37 a.m. PST. The Riviera property is being cleared to make way for the Las Vegas Convention Center District, a project that is expected to generate 7,000 high paying construction jobs and 6,000 full-time permanent jobs in southern Nevada.

Luncheon guests enjoyed an exciting Las Vegas experience showcasing the latest the destination has to offer including live entertainment from music icon, Rick Springfield. The musician joins an impressive lineup of entertainers slated to perform in Las Vegas this summer.

The LVCVA also showcased its Vegas VR virtual reality technology during the WEC 2017 Preview Lunch. The Vegas VR app encouraged attendees to “see themselves in Las Vegas” with a series of immersive 360-degree videos. With the use of this technology, Las Vegas is quickly becoming a front-runner in the virtual reality space for destination marketing organizations.

As the No. 1 trade show destination for a record 22 consecutive years according to Trade Show News Network, MPI WEC 2017 will provide meeting planners a timely opportunity to experience some of the new resorts, venues and amenities that Las Vegas has to offer. The destination hosted nearly 22,000 meetings in 2015, welcoming more than 5.9 million convention delegates.