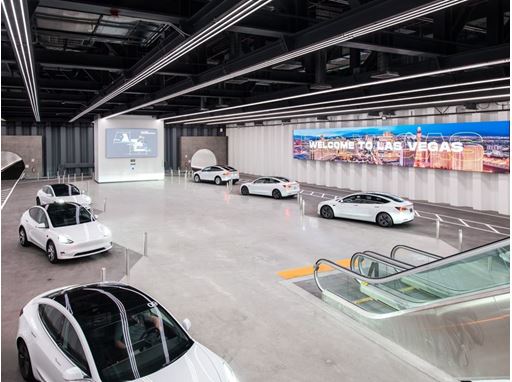 LAS VEGAS – The Las Vegas tourism community took a significant step forward today in the development of the Vegas Loop, an express underground transportation solution that will help ease traffic congestion and offer visitors and locals convenient access to world-class resorts and entertainment.

The Clark County Commission unanimously approved the special use permit and franchise agreement for the proposed 29-mile tunnel transportation system designed by Elon Musk’s The Boring Company.  The special use permit allows The Boring Company to apply for and receive building permits to construct the proposed tunnels. The franchise agreement allows the company to operate the system, collect fares and oversee advertising and partnerships.

“We are very excited to take the next steps, working with Clark County leaders and our partners throughout Las Vegas, to build a fast, safe transportation system for this incredible destination,” says Steve Davis, president, The Boring Company.

There are currently 51 planned stations for the Vegas Loop throughout the Las Vegas Strip and Clark County. The system is also anticipated to connect to the City of Las Vegas and McCarran International Airport. Passengers can travel directly to their desired location without stopping and the Vegas Loop will be a must-experience attraction for visitors.

“Las Vegas continues to innovate and transform itself. The Vegas Loop will be a game-changer for our visitors in moving them around our exciting destination quickly, conveniently and in an entertaining ‘Only Vegas’ way,” said Steve Hill, president and CEO of the Las Vegas Convention and Visitors Authority (LVCVA).