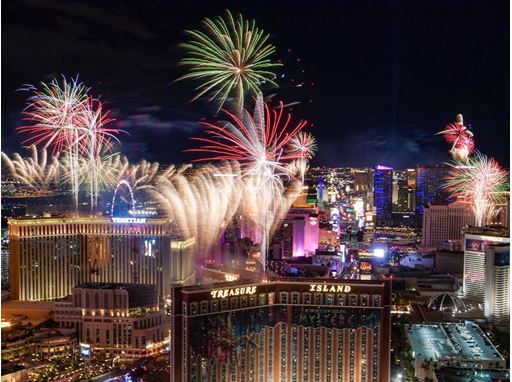 LAS VEGAS – The largest New Year’s Eve fireworks show in the United States lit up the Las Vegas sky on New Year’s Eve, as the destination welcomed 2022 with a dazzling display of pyrotechnics. Following a one-year hiatus, the “America’s Party” spectacular returned to the Las Vegas Strip at midnight on Saturday, Jan. 1, 2022.

Choreographed to a custom soundtrack, the eight-minute show highlighted songs perfectly suited for the 2022 "Deuces Wild" theme. Following the traditional “Auld Lang Syne,” Aerosmith’s “Deuces Are Wild” and Taylor Swift’s “22” kicked off the show that also featured tracks by Pitbull, KC and The Sunshine Band, The Weeknd, Diana Ross, and Joan Jett and the Blackhearts. The soundtrack could be heard on local radio stations KOMP 92.3 and 97.1 The Point while the show illuminated the night sky.

The intricate pyrotechnic display took more than a year to develop, and featured many custom effects designed by Fireworks by Grucci—including Vibrant Pastels, Swimming Stars, Color Changing Saturns, Red Hearts and Happy Faces. More than 11,500 electrical circuits were programmed to launch with lighting speed and precision, with each circuit capable of displaying several light, color, and audible effects. The world-class pyrotechnic show culminated in a grand finale, with Silver Chrysanthemums and barrages of Titanium Flash Salutes rumbling and rattling the sky above the Strip.