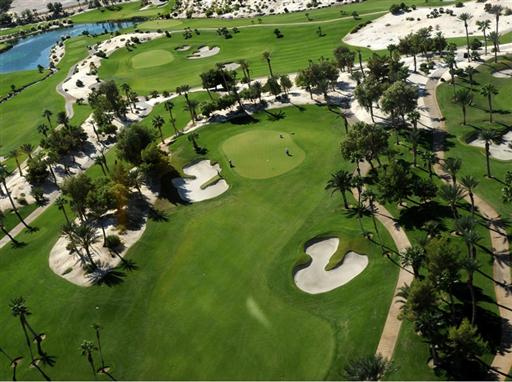 From exquisite championship courses designed by legends of the sport to lush fairways and breathtaking views – there are more than 45 golf courses available for play in Las Vegas throughout the year thanks to the area’s inviting climate.  Las Vegas offers challenging, yet beautifully sculpted courses developed by world-renowned designers including Jack Nicklaus, Tom Weiskopf, Billy Casper, Arnold Palmer and Pete Dye.
The sport of golf has played an important role in the development in the destination and has been in Las Vegas since 1938 when the Las Vegas Golf Club opened near downtown Las Vegas. The Desert Inn Golf Club held the destination’s first professional event with its first annual Tournament of Champions in 1953.
Many of the world's most famous professional and amateur golfers, including Tiger Woods, former U.S. President Bill Clinton and NBA legend Michael Jordan, feel at home on the Las Vegas links.
Las Vegas has played host to many nationally and internationally televised golf tournaments, including the PGA Tour's Shriner’s Hospitals for Children Open, LPGA Takefuji Classic, Michael Jordan Invitational and Wendy's Three-Tour Challenge.
In 2009, the Las Vegas Golf Hall of Fame unveiled a museum-quality exhibit featuring classic photos and memorabilia from such Las Vegas golf champions as Jim Colbert, Arnold Palmer, Jack Nicklaus, Annika Sorenstam and many others at its new home, the clubhouse at Las Vegas National Golf Club. A 16-person committee made up of Las Vegas golf professionals, media, amateur association leaders, and Hall of Fame members oversees the voting process. The annual induction ceremony takes place during the week of the PGA Tour’s Shriners Hospitals for Children Open. A special new exhibit commemorating the Las Vegas Founders Club’s many contributions to golf in Las Vegas was unveiled in 2010. The exhibit features the actual trophies used for 25 years for the PGA Tour's Las Vegas Invitational plus other memorabilia from the LPGA Tour, PGA Tour and Tour of Champions events played in Las Vegas and organized by the Las Vegas Founders Club.
Topgolf, in partnership with MGM Grand, opened its first Las Vegas location in spring of 2016. Topgolf Las Vegas features four levels with 107 climate-controlled hitting bays into a 215-yard outfield. The golf entertainment complex also has two pools, a stage for live performances that can hold up to 900 guests, VIP cabanas and private suites, full-service restaurant and bars.