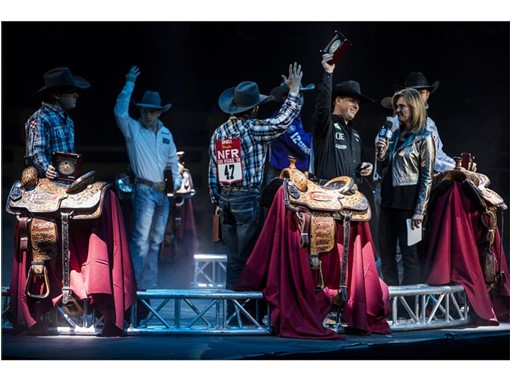 LAS VEGAS -- Wrangler National Finals Rodeo is the season-ending championship event for the Professional Rodeo Cowboys Association and is widely acknowledged to be the world’s premier rodeo. Held annually since 1959 – and since 1985, every December at the Thomas & Mack Center in Las Vegas – the Wrangler NFR is ProRodeo’s richest and most prestigious rodeo, and it showcases the very best cowboys, barrel racers and livestock in the world.
Kicking off the week, the annual Gold Carpet event at the South Point Hotel on December 4, 2018. The event was a chance for competitors and their families to take photos with fans and sign autographs.
Also part of NFR week is the 32nd Annual Downtown Hoedown at the Fremont Street Experience on December 5, 2018. The five-block entertainment district located in historic downtown Las Vegas hosted the official kick-off party featuring full-length performances by some of country music’s most sought-after acts including Chris Janson, Granger Smith, Sammy Kershaw, Aaron Tippin, Collin Raye, Haley & Michaels and Corb Lund.
On Thursday, December 6, 2018, over 16,000 rodeo fans filled the Thomas & Mack in Las Vegas for the first night of the Wrangler National Finals Rodeo.
With more than 440,000 square feet of show floor and more than 350 exhibitors from across the United States, the Cowboy Christmas show, held at the Las Vegas Convention Center from December 6 to December 15, 2018, features unique products, including custom-made jewelry, western wear, boots and spurs, furniture, original art, handmade crafts and home goods. Attendees also find the best source for the official Wrangler NFR and PRCA merchandise.
Fans and competitors gathered for the the tenth and final go-round of the Wrangler National Finals Rodeo at the Thomas & Mack Center Saturday, Dec. 15, 2018, in Las Vegas. The action on the dirt was competitive and intense from start to finish. At the end, the following earned the title of world champion: Tim O’Connell, bareback riding; Tyler Waguespack, steer wrestling; Clay Smith (header) and Paul Eaves (heeler), team roping; Wade Sundell, saddle bronc riding; Caleb Smidt, tie-down roping; Hailey Kinsel, barrel racing; Sage Kimzey, bull riding and Trevor Brazile, All-Around.
The Wrangler National Finals Rodeo, which ran from Dec. 6 – 15, wrapped up its ten-day run at the Thomas & Mack Center in Las Vegas. Total attendance over the ten performances reached 169,171, up from 168,952 inn 2017.