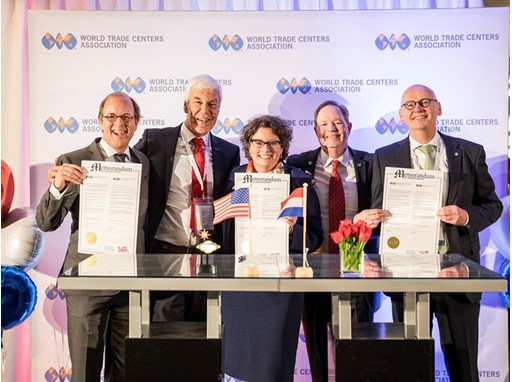 LAS VEGAS - The Las Vegas Convention and Visitors Authority (LVCVA) is continuing to expand global business partnerships for the destination through the World Trade Centers Association (WTCA) network. World Trade Center Las Vegas signed three Memorandums of Understanding (MOU) at the 49th World Trade Center Association General Assembly in the Netherlands. World Trade Center Las Vegas, host of the 48th General Assembly, entered agreements with this year’s host World Trade Center Leeuwarden in addition to World Trade Center Twente and World Trade Center Denver.
The agreements encourage Las Vegas to co-market with Leeuwarden, Twente and Denver to market under the World Trade Center Association’s expansive brand, brand creating access to key trade information and market research, and facilitating business trade missions around the world.
“Following a record-breaking year for business travel, with more than 6.6 million people traveling to the destination to attend a meeting or convention, there is no question Las Vegas is a place where business gets done,’ said Chris Meyer, WTC Las Vegas Executive Director and LVCVA Vice President of Sales. “The WTCA network provides a valuable resource to make connections that will drive business forward and our MOU agreements with WTC Leeuwarden, WTC Twente and WTC Denver are sure to generate new and lucrative opportunities.”
The partnership between WTC Las Vegas and WTC Twente has already proven beneficial for both destinations as the groups successfully arranged a delegation from the Netherlands at POWER-GEN International at the Las Vegas Convention and World Trade Center.
“After the WTCA General Assembly in 2017 in Las Vegas and in participating with a Dutch trade delegation during POWER-GEN International 2017 at the Las Vegas Convention and World Trade Center the MOU between our World Trade Centers is a next step in strengthening our economic ties,” explained Freerk Faber, World Trade Center Twente Director.
The Netherlands is one of the top fifteen international markets for Las Vegas with nearly 58,000 visitors in 2016, which is a 4% increase from the year before.
The signed MOUs will further enhance collaboration to build the Las Vegas brand as a global business destination and grow international visitation to both the destination and to tradeshows like CES®. Additionally, the MOUs provide the opportunity to expand business opportunities across a number of industry sectors.
WTC Las Vegas’ MOU partnership with WTC Leeuwarden represents an instrumental collaboration between the ‘Entertainment Capital of the World’ and the ‘European Capital of Culture’. The two organizations plan to collaborate to elevate the reputation of each destination’s versatile offerings.
“We look forward working together with World Trade Center Las Vegas because we can offer them the latest technologies in the water sector and they are the specialist in the organization of congresses and expositions. It is a clear win – win situation,” said WTC Leeuwarden Managing Director Evert Jan Schouwstra.
WTC Las Vegas is a partnership between the LVCVA and the Consumer Technology Association (CTA) TM, owner and producer of CES®, the world’s largest and most influential global technology event. In addition to marketing and branding Southern Nevada as a tourism and convention destination worldwide, the LVCVA operates the Las Vegas Convention Center, the nation’s only convention center designated as a World Trade Center site and one of the largest convention centers in the United States. Together, the LVCVA and CTA market Las Vegas to business travelers around the globe under the World Trade Center brand.
“World Trade Center Las Vegas has experienced incredible success in fostering mutually-beneficial relationships in southern Nevada and around the globe,” said Karen Chupka, executive vice president, CES. “The international appeal of efforts and initiatives from both CTA and the LVCVA align perfectly with the World Trade Center Association’s mission of helping member organizations connect globally and prosper locally.”
In addition to the newly-signed MOUs with WTC Leeuwarden, WTC Twente and WTC Denver, the WTC Las Vegas has signed memorandums of understanding with WTC Montevideo, WTC Dulles Airport, WTC Taipei, WTC Mexico City, WTC Brussels, WTC Beijing, WTC Miami, WTC Istanbul, WTC Seoul, WTC Sao Paulo, WTC Ft. Lauderdale and WTC Santiago and WTC Trieste.
The LVCVA also has a MOU with the U.S. Department of Commerce’s International Trade Administration to promote travel and tourism exports.
Las Vegas is securing the future success of the meetings and conventions industry with more than $15 billion in investment projects across the destination including the addition of more than 3 million square ft. of meetings space. Development is currently underway on the $1.4B Las Vegas Convention Center District (LVCCD) project, which incorporates the expansion and renovation of the existing Las Vegas Convention Center. The expansion is slated for completion in time to welcome CES in 2021. WTC partners have expressed their support and interest in sharing best practices that can be applied to similar initiatives taking shape across the globe.
"With the new World Trade Center Denver Development breaking ground and opening in 2020, we will now be in the business of offering larger global conventions," said Karen Gerwitz, President of the World Trade Center Denver, Colorado.  "We are honored to enter into a partnership with WTC Las Vegas and the LVCVA to learn from the very best in the business."
To learn more about WTC Las Vegas efforts please visit https://www.wtca.org/world-trade-center-las-vegas.