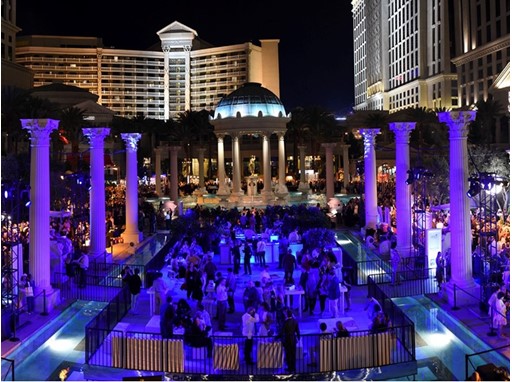 LAS VEGAS -- Vegas Uncork’d continued April 29 with The Grand Tasting, featuring signature dishes from 50+ renowned chefs, free-flowing wines, and spirits from around the world. Set against the backdrop of the luxe Garden of the Gods Pool Oasis at Caesars Palace, guests had the opportunity to meet and learn from the world’s most respected culinary figures, while sampling uniquely curated and expertly crafted tastes.

The 10th anniversary of Vegas Uncork’d by Bon Appétit began with a pop April 28 as some of the biggest names in the culinary world united at Doge’s Palace Piazza at The Venetian. Joined by more than 10 iconic chefs including Guy Savoy, François Payard and Emeril Lagasse, Chef Daniel Boulud traditionally sabered a magnum of Mionetto Prosecco to kick off the weekend of festivities at Caesars Palace, The Cromwell, The Venetian® and The Palazzo®.

Joined by Pamela Drucker Mann, Publisher & Chief Revenue Officer of Bon Appétit & Epicurious, Cathy Tull, Senior Vice President of Marketing for Las Vegas Convention and Visitors Authority and Sabrina Keraudren, Senior Marketing Manager for Mionetto USA, Adam Rapoport, Editor in Chief of Bon Appétit, welcomed the group and thanked the chefs for their continued support of Vegas Uncork’d by Bon Appétit over the years. Additionally, the group was presented with a custom six-tier Vegas Uncork’d by Bon Appétit cake created by “Cake Boss” Buddy Valastro to celebrate the 10th anniversary. Following the cake presentation and ceremonial saber off, Daniel Boulud led the chefs in a toast to commemorate the occasion.

The star-studded weekend welcomes returning favorites such as Emeril Lagasse, Guy Savoy, Gordon Ramsay, Daniel Boulud, Nobu Matsuhisa and Brian Malarkey among others, for what is sure to be an unforgettable culinary indulgence. For the first time ever, Giada De Laurentiis will be hosting brunch at her first and only namesake restaurant at The Cromwell and the festival will offer events at select venues off The Strip. Additionally, guests who want to sample a variety of signature dishes can still purchase tickets to the Grand Tasting, where they can mix and mingle with more than 50 award-winning chefs and mixologists at the luxurious Garden of the Gods Pool Oasis at Caesars Palace.