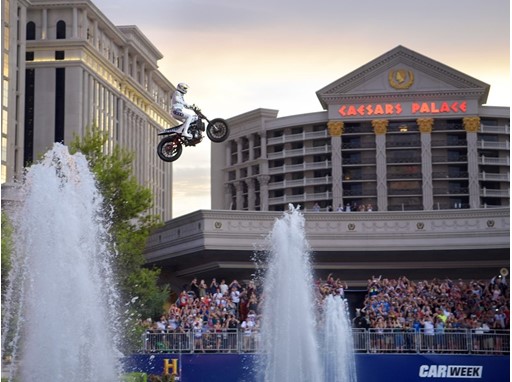 LAS VEGAS – Sunday night, July 8, in front of an estimated 25,000 fans watching in-person from Las Vegas and more tuning in live on television across North America, action sports superstar Travis Pastrana celebrated Evel Knievel during the unprecedented HISTORY® live event, “Evel Live.” Produced in partnership with Nitro Circus, “Evel Live” saw Pastrana pay homage to Knievel’s legacy as he set out to recreate three of the American legend’s most iconic jumps. Pastrana pushed the limits even further though, breaking Knievel’s famous car and Greyhound bus jump records before completing the epic Caesars Palace fountain jump that left Knievel grasping for his life 50 years ago. Shortly after Pastrana took a celebratory dive into the Caesars Palace fountains to cap off the night, #EvelLive trended at #1 on Twitter.

“I’m thrilled to have had this opportunity to honor Evel Knievel, whose guts and showmanship created the foundation for action sports,” Travis Pastrana said afterwards. “Evel pushed himself and flew further on a motorcycle than anyone thought possible. So with this modern day tribute we wanted to bridge generations – from my parents generation who was inspired by Evel to the generation after me who may not know much about the original stunt men who paved the way – HISTORY® and Nitro Circus wanted to show just how incredible his accomplishments were. To be able do that in Las Vegas and at Caesars Palace, where Evel’s legend was born, is so awesome.”