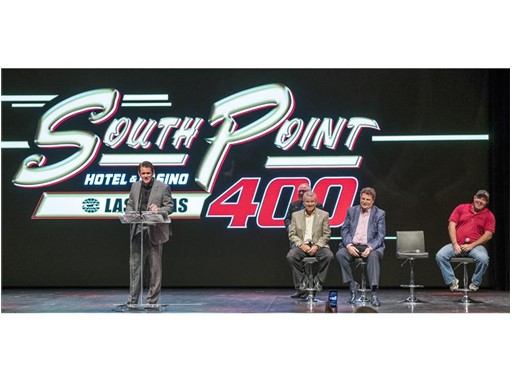 LAS VEGAS -- The South Point Hotel, Casino and Spa has been named title sponsor of the September Monster Energy NASCAR Cup Series race at Las Vegas Motor Speedway (LVMS), according to an announcement made Nov. 30 during a press conference at the hotel in Las Vegas. The multi-year agreement will make the Michael Gaughan-owned property title sponsor of the South Point 400 beginning in 2018. The 267-lap race, set for Sunday, Sept. 16, will be the first in the 2018 Cup playoffs. The sponsorship underscores a longstanding partnership between LVMS and Gaughan that dates to the speedway’s construction in 1996.
A longtime off-road racer, Gaughan has been a motorsports enthusiast for decades, sponsoring races at LVMS since 1998 as well as race teams led by his son, Brendan, in the NASCAR Camping World Truck Series and NASCAR Xfinity Series through the years.
The South Point 400 will be preceded by a NASCAR Camping World Truck Series race on Friday, Sept. 14, and a NASCAR Xfinity Series race on Saturday, Sept. 15. LVMS will be the first track in NASCAR history to host two tripleheader weekends in the same year.
LVMS’ first 2018 tripleheader weekend will consist of Stratosphere Pole Day and a NASCAR Camping World Truck Series race on Friday, March 2, the Boyd Gaming 300 NASCAR Xfinity Series race on Saturday, March 3, and the Pennzoil 400 presented by Jiffy Lube on Sunday, March 4.
###