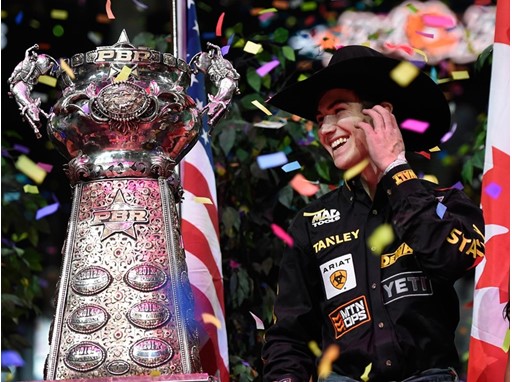 LAS VEGAS -- Twenty-year-old Jess Lockwood of Volborg, Mont., became the youngest cowboy to clinch a world title on the Professional Bull Riders circuit on Sunday, Nov. 5, in Las Vegas. Lockwood received a $1 million bonus as the 2017 World Finals concluded its five-day run at T-Mobile Arena. With the world’s most coveted bull riding title under his belt, Lockwood broke the age record set by Mike Lee of Decatur, who snared the gold buckle at age 21 in 2004. The PBR world champion receives $1 million in addition to the prize money he earned during the regular season and the World Finals. Lockwood’s total earnings in 2017 were $1,525,292. Photography by David Becker/Las Vegas News Bureau.