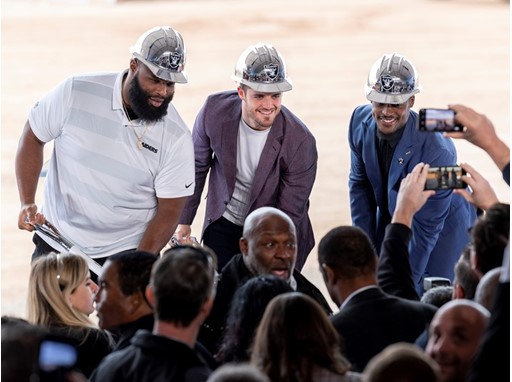 HENDERSON, NV -- The NFL's Raiders franchise broke ground on Monday, January 14, 2019, in Henderson, Nev., on the site of the team's future practice facility and team headquarters. The groundbreaking was a chance for the City of Henderson, Nevada's second largest city, to become a part of the Raiders family as the team prepares to move to Las Vegas in 2020. On hand for the event were Raiders President Marc Badain; Henderson Mayor Debra March; Henderson City Councilman Dan Shaw; and Henderson City Manager Richard Derrick. Also on hand were Raiders players past and present including Quarterback Derek Carr.
The storied NFL franchise won approval from NFL owners in 2017 to move the team from Oakland, Cal. to Las Vegas. The Raiders are schedule to begin play in Las Vegas in 2020 once the Las Vegas Stadium is completed just to the west of the Las Vegas Strip.