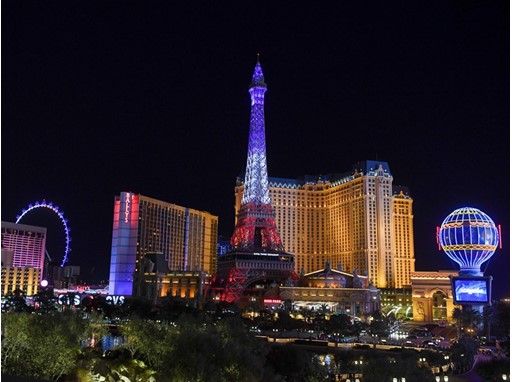 LAS VEGAS -- Michelin-starred chef Guy Savoy and legendary French singer and actress Line Renaud joined Caesars Entertainment executives and Clark County Commissioner Jim Gibson in celebrating the platinum anniversary of Paris Las Vegas and revealing a dazzling new nightly Eiffel Tower light show.
Inspired by the Eiffel Tower’s illuminations in France, the enhanced $1.3 million lighting at the Paris Las Vegas attraction is a free, recurring show featuring synchronized and choreographed twinkling and colored lights for visitors to enjoy nightly on The Strip. In partnership with Vision Sign Inc., Paris Las Vegas installed approximately 6,000 LED strobe lights and programmable colored LED lights on the tower’s exterior.
An icon of the city skyline since opening on Sept. 1, 1999, the 541-foot-tall Eiffel Tower at Paris Las Vegas is a half-scale replica of the famous Paris, France landmark and remains the tallest reproduction of the original. The high-altitude attraction consists of 5,000 tons of wielded steel.