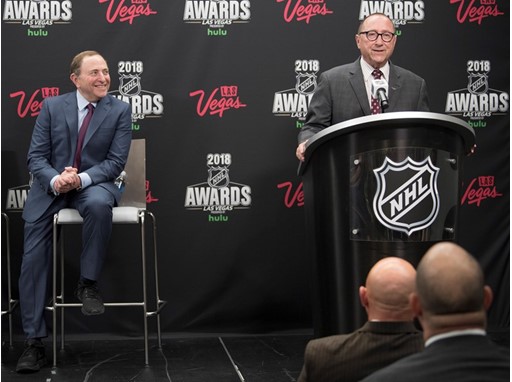 LAS VEGAS -- Just a few hours before the Vegas Golden Knights would take to the ice for the first round of Stanley Cup Playoffs on April 11 in a historic inaugural season, the NHL announced that its annual awards ceremony would return to Las Vegas. The NHL Awards presented by Hulu will be held at the Joint at the Hard Rock on Wednesday, June 20. Additionally, the NHL and the Las Vegas Convention and Visitors Authority (LVCVA) will continue with a multi-year extension of a partnership, which is now in its 10th year.
NHL Commissioner Gary Bettman, LVCVA CEO Rossi Ralenkotter and Vegas Golden Knights President Kerry Bubolz made the announcement, part of festivities outside of T-Mobile Arena, where the Knights would later face the the Los Angeles Kings for the first round of playoffs on April 11.
Fans packed Toshiba Plaza outside of the arena for the pre-game celebration, which included mutiple activities and photo opps and a free concert headlined by GRAMMY-nominated rapper Logic.