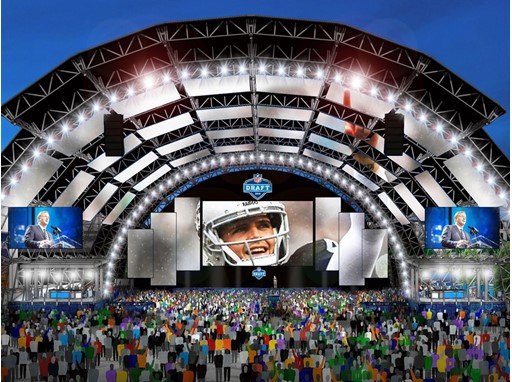 As the Official Casino Sponsor of the NFL, Caesars Entertainment will host the Draft Main Stage and NFL Draft Experience Presented by Oikos® Triple Zero adjacent to the CAESARS FORUM, which will house Selection Square

Fountains of Bellagio to Host the NFL Draft Red Carpet

LAS VEGAS – Bringing fans and players together, the 85th NFL Draft will host various free events at iconic Las Vegas locations, April 23-25, 2020, the NFL announced today. The Draft comes to Las Vegas as the Raiders prepare to embark on their first season in the city and at Allegiant Stadium. The celebration - at the NFL Draft Red Carpet, NFL Draft Main Stage and NFL Draft Experience – will include free immersive activities and live entertainment and performances, bringing a new level of excitement to the NFL Draft that only Las Vegas could provide.

“Embracing Las Vegas’s unique energy and iconic locations as the backdrop for the 2020 NFL Draft will further elevate this growing event,” said PETER O’REILLY, NFL EXECUTIVE VICE PRESIDENT, CLUB BUSINESS & LEAGUE EVENTS. “We look forward to continuing to work closely with the Raiders, Las Vegas officials and the Las Vegas Convention and Visitors Authority to create an unforgettable week-long celebration for our fans, the incoming prospects and our partners, as we kick off the NFL’s next 100 years.”

Set against the iconic backdrop of the Strip, the NFL Draft Main Stage will be constructed next to the CAESARS FORUM. Free and open to the public, fans are invited to gather at the Draft Main Stage viewing zone to watch the first round selections on Night 1 (Thursday), Rounds 2-3 on Night 2 (Friday), and Rounds 4-7 on Day 3 (Saturday).  The Main Stage will also host daily performances by headlining acts throughout the Draft.

All three days of the NFL Draft will be broadcast on NFL Network, ESPN, ESPN Deportes and ABC – including two nights of primetime coverage on Thursday and Friday.

“The Raiders are thrilled to join the Las Vegas Convention and Visitors Authority, the resort corridor, and the local community in welcoming fans to Las Vegas for the 2020 NFL Draft,” said RAIDERS PRESIDENT, MARC BADAIN. “Just as the NFL journey begins on Draft weekend for many young players, the Silver and Black’s journey in the Sports and Entertainment Capital of the World is also just beginning. There is no better place to showcase this special event than on the famous Las Vegas Boulevard, and fans will be treated to a truly unique experience in an iconic location.”

Located adjacent to the NFL Draft Main Stage, the NFL Draft Experience presented by Oikos® Triple Zero will be a free, three-day football festival highlighted by interactive games, the Vince Lombardi Trophy, autograph sessions with NFL players and Legends, brand activations, giveaways and the NFL Shop presented by Visa. At the center of the action will be the NFL Draft Experience Stage, which will feature special performances by Las Vegas talent as well as interactive NFL-themed experiences.

“We are excited to partner with the NFL and the Raiders for our first major event together in Las Vegas,” said STEVE HILL, CHIEF EXECUTIVE OFFICER AND PRESIDENT, LAS VEGAS CONVENTION AND VISITORS AUTHORITY. “Our destination prides itself on creating unforgettable and epic events and experiences and we believe the 2020 Draft will be among the most thrilling events Las Vegas has ever hosted.  We look forward to welcoming hundreds of thousands of NFL fans to our world-class destination on April 23.

CAESARS FORUM, the newest state-of-the-art conference center, located adjacent to the High Roller observation wheel on the Las Vegas Strip, will be host to Selection Square. This exclusive area will feature the team tables where representatives from each club will make their draft selections.

The 2020 NFL Draft will open on Thursday, April 23 with the official NFL Draft Red Carpet, which will be constructed on the famed Fountains of Bellagio. Starting at 2:30 PM PT, attending prospects will make their debut on the carpet. New this year, the red carpet will feature the Draft Red Carpet Stage, an exciting new addition to the opening event.

Visit NFL.com/2020Draft for all the latest NFL Draft updates and announcements.

ABOUT THE LVCVA
The Las Vegas Convention and Visitors Authority (LVCVA) is charged with marketing Southern Nevada as a tourism and convention destination worldwide, and also with operating the Las Vegas Convention Center. With nearly 150,000 hotel rooms in Las Vegas alone and more than 11 million square feet of meeting and exhibit space citywide, the LVCVA's mission centers on attracting ever increasing numbers of leisure and business visitors to the area. Download the virtual reality app, Vegas VR, to experience Las Vegas from your iPhone or Android by visiting http://www.vrtv.vegas/. For more information, go to www.lvcva.com or www.visitlasvegas.com.