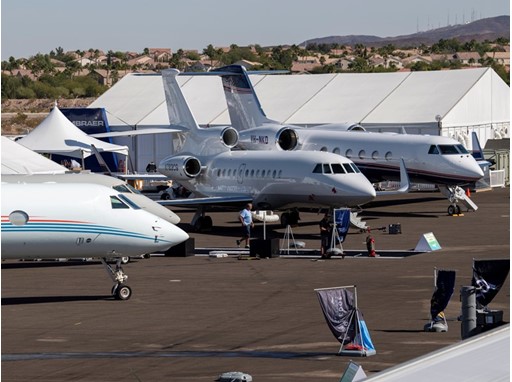 LAS VEGAS --  Civic and business leaders welcomed the return of the world’s largest business aviation trade show to Las Vegas on Oct. 21, and welcomed the first-time availability of sustainable aviation fuels (SAF) at Henderson Executive Airport (HND) as part of the event’s aircraft display.
NBAA’s Business Aviation Convention & Exhibition (NBAA-BACE) opens this week, and runs Tuesday to Thursday, Oct. 22–24, 2019, at HND and the Las Vegas Convention Center.
As part of the show’s week-long focus on sustainability, all turbine airplanes refueling at the airport will take on some amount of SAF before departure. The fuel is a non-fossil power source that can reduce aviation’s carbon lifecycle emissions by up to 80 percent.
After planes refuel and depart at the show’s close on Thursday, Oct. 24, an estimated 150,000 gallons of SAF are expected to have been pumped at HND – thanks to a collaborative effort between the airport, local fuel suppliers and show organizers.
“I applaud this effort to reduce the aviation emissions footprint in Southern Nevada, and look forward to the continued implementation of other sustainability initiatives throughout our Clark County Aviation System,” said Clark County Commissioner Michael Naft. "These first steps toward a more environmentally conscious aviation operation would not be possible without strong partnerships within the industry. We appreciate NBAA’s leadership in this area and its long-standing focus on sustainability.”
The business aviation industry has long been committed to sustainability, including through the development and adoption of SAF, and this year’s NBAA-BACE will feature sustainability programming and events throughout the show. View a lineup of planned sustainability-focused events at 2019 NBAA-BACE.
"Sustainability, including the availability and use of SAF, is key to the future of business aviation,” said NBAA President and CEO Ed Bolen. “We applaud airport and county leaders for partnering with us to make SAF available at Henderson Executive Airport this week. This initiative demonstrates that as it becomes more available, and people are increasingly aware of it, demand for use of the fuels will continually increase as well."
Bringing about 25,000 attendees to the city, NBAA-BACE is expected to generate a total economic impact of $40.5 million over the course of the week, according to the Las Vegas Convention and Visitors Authority.
“With more than 24,000 meetings conducted in Las Vegas every year, business aviation has an important impact on the local economy,” said Steve Hill, CEO of the Las Vegas Convention and Visitors Authority. “As a community and an organization, we also share a mutual focus on sustainability. Southern Nevada is a leading example of water conservation efforts using less water today than we did thirty years ago. We are also a leading destination for renewable energy and commend NBAA for their SAF efforts especially while they are here in town.”
Learn more about NBAA-BACE.
# # #
Founded in 1947 and based in Washington, DC, the National Business Aviation Association (NBAA) is the leading organization for companies that rely on general aviation aircraft to help make their businesses more efficient, productive and successful. The association represents more than 11,000 companies and professionals and provides more than 100 products and services to the business aviation community, including the NBAA Business Aviation Convention & Exhibition (NBAA-BACE), the world’s largest civil aviation trade show. Learn more about NBAA at www.nbaa.org.
Members of the media may receive NBAA Press Releases immediately via email. To subscribe to the NBAA Press Release email list, submit the online form.
Contact: Dan Hubbard, 202-783-9360, dhubbard@nbaa.org