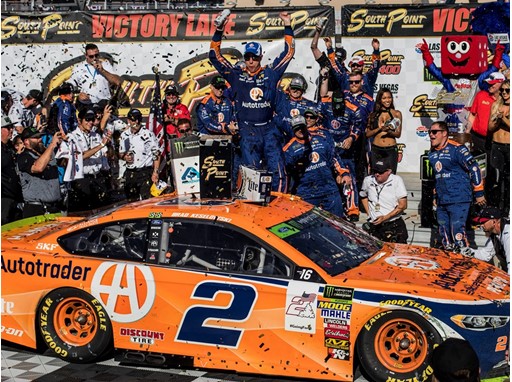 LAS VEGAS -- NASCAR has arrived in the "Entertainment Capital of the World" to kick off the 2018 Monster Energy NASCAR Cup Series Playoffs in grand fashion. Las Vegas will be the scene for an action-packed three days, Sept. 14-16, as NASCAR's 16 best drivers and teams of 2018 begin their championship aspirations quest.
To celebrate the start of the sport's postseason and engage fans, the festivities center around three major events: Monster Energy NASCAR Cup Series Playoffs Media Day; NASCAR Burnout Blvd Fueled by Sunoco (formerly known as Victory Lap); and a two-day Playoffs Party at Fremont Street Experience culminating in a free concert by platinum-selling recording artist Cole Swindell on 3rd Street Stage. All the proceedings take place before the green flag drops at Las Vegas Motor Speedway on Sunday, Sept. 16, when it hosts its inaugural postseason race - the South Point 400 - and NASCAR's playoff opener at 3 p.m. ET / 12 p.m. PT (NBCSN, PRN, SiriusXM NASCAR Radio).
Race fans will have the unique opportunity to see their favorite cars up close, interact with the sport's top drivers and take part in a variety of other activities that build momentum and enthusiasm for the historic race weekend.
Drivers kicked off the 2018 NASCAR Playoffs by laying down rubber on the Las Vegas Strip Sept. 13. After pre-event pageantry outside the Miracle Mile Shops, all 16 drivers paraded down the Las Vegas Strip then north to Spring Mountain Road to take turns doing the victory burnouts they hope to perform again during the playoffs. Fans viewed the procession along Las Vegas Boulevard, including the pre-event festivities outside the Miracle Mile Shops and the burnout location at Spring Mountain, between Fashion Show and Wynn Las Vegas.
Fans can celebrate the eve of the Playoffs on Saturday, Sept. 15 with stars Ryan Blaney, Erik Jones and other NASCAR drivers and personalities at the inaugural Monster Energy NASCAR Cup Series Playoffs Party with musical artist and Platinum-selling Ten-time No. 1 rising superstar Cole Swindell. Free to all fans and held at the Fremont Street Experience, the event will feature conversations with drivers and NASCAR personalities. Sponsored by Chevrolet, Ford and Toyota, the Playoffs Party will culminate with a concert by Cole Swindell - the 2015 American Country Music New Artist of the Year award winner who will release his third album, All of It, on Aug. 17.

On-track activity kicks off on Thursday, Sept. 13 at Las Vegas Motor Speedway where NASCAR's next generation of rising stars will be on display at The Dirt Track in the NASCAR K&N Pro Series West's much anticipated return to dirt - the Star Nursey 100. Prior to the race, Monster Energy NASCAR Cup Series stars Kevin Harvick and Clint Bowyer will be the featured guests at an autograph session at the track.

Editor's Note: This story will be updated througout the weekend with additional photos and video.