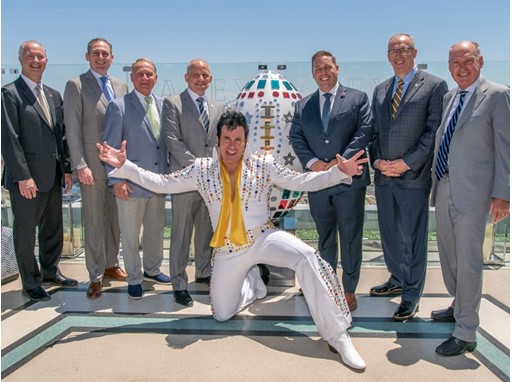 LAS VEGAS -- Beginning in 2020, the Las Vegas Bowl will be played in the new, state-of-the-art Las Vegas Stadium and feature a team from the Pac-12 Conference vs. a team from either the SEC or the Big Ten Conference in a six-year deal announced on June 4, 2019, at the Palms Resort in Las Vegas, Nev.
On hand for the announcement were John Saccenti, Mitsubishi Motors Las Vegas Bowl executive director; Larry Scott, Pac-12 Commissioner; Greg Sankey, SEC Commissioner; James E. Delany, Big Ten Commissioner; Marc Badain, Raiders President; Steve Hill, CEO and president, LVCVA; and Peter Derzis, Senior Vice President of College Sports Programming and Events, ESPN. The new agreement will run from the 2020 game through the 2025 game and will move to a post-Christmas date for the first time. During those years, the Las Vegas Bowl will get the No. 2 selection (after the College Football Playoff selection) from the Pac-12 and share that position with the Holiday Bowl. The Las Vegas Bowl will also share a spot with the Belk Bowl in the SEC "pool of six" that follows the CFP and Cirtus selections and host a team here in 2020, '22 and '24. The Las Vegas Bowl will share a Big Ten spot with the Music City Bowl and the CFP, Citrus and Outback selections and host a team here in 2021, '23 and '25.