LEVEL Arrives in Las Vegas on its Inaugural Flight from Paris 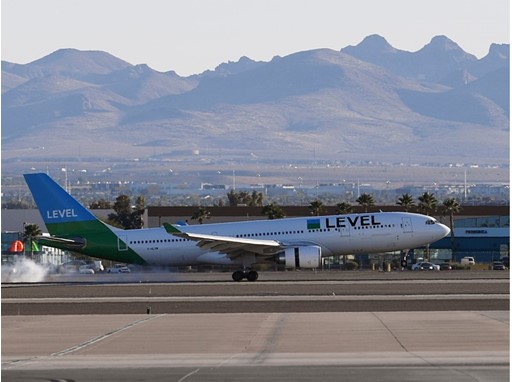 LAS VEGAS -- The first nonstop LEVEL flight from Paris to Las Vegas arrived at McCarran International Airport on October 30, 2019 with a water arches salute. LEVEL, the low-cost long-haul airline from IAG and sister airline to Aer Lingus, British Airways and Vueling, will operate two flights per week on Wednesday and Sunday.
To celebrate the launch of this new route, LEVEL has released introductory $118* one-way fares, subject to availability. The fare is available from November 3, 2019 to March 29,  2020 only on flylevel.com.
"We are delighted to add Las Vegas to our network from Paris. This new route, our second from Paris to the United States, allows to offer even more travel opportunities, always with attractive rates and an excellent product", says  Aurelius Noell, Commercial Director of LEVEL. “This is the only direct flight between Las Vegas and Paris, opening up a convenient route for tourists to Las Vegas and for Nevada residents to Europe”
"We are very pleased to welcome this new direct flight between Paris and Las Vegas  provided by our new airline partner, LEVEL,"  added Steve Hill,  CEO/President  of  the  Las Vegas Convention and Visitor Authority (LVCVA). "This new link offers an additional option  and  more  flexibility  for French and European visitors. Developing an air network is a long-term process for a company, and we celebrate this milestone with LEVEL and McCarran International Airport.”
As part of the Consumer Electronics Show (CES) held in La Vegas in January 2020, LEVEL is setting up a special direct flight from Orly on Monday, January 6, 2020, with a return on Friday, January 10. These direct flights will be in addition to the two weekly frequencies already planned between the two cities.
LEVEL has thre Airbus A330-200 based in Paris Orly, configured with 293 seats in Economy and 21 Premium seats. On board, each passenger has an plug or USB socket, a high-definition digital screen with complimentary films and TV shows, high-speed WiFi, and a complete catering offer.
*One-way fare 'from,' subject to availability. Taxes, fees and surcharges included. Based on a basic fare which excludes baggage and meals.