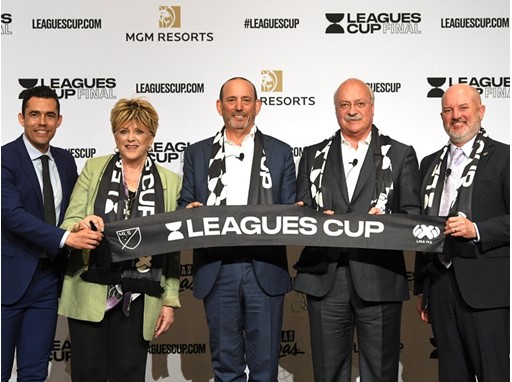 LAS VEGAS -- Major League Soccer (MLS) and Liga MX today announced that the city of Las Vegas will host the first-ever final of the new annual competition between the two top soccer leagues in North America, Leagues Cup, on Wednesday, September 18 at Sam Boyd Stadium. The event is being organized with the support of MGM Resorts and Las Vegas Events.
On “The Road to Las Vegas,” the 2019 edition of Leagues Cup will feature four clubs from each league in an eight-team single-elimination tournament that launches with quarterfinals on July 23 and 24 at the stadiums of the MLS clubs. The semifinals will be August 20 at venues to be determined based on quarterfinal results. Then it's off to Las Vegas for the Leagues Cup Final.
“Soccer is the world’s sport and Las Vegas is the world’s city,” Mayor Carolyn G. Goodman said. “It is a perfect fit for the exciting League Cup final to be played in Las Vegas. Our city loves soccer, and we hope to continue our relationship with the League Cup and Major League Soccer in the years to come.”
“Las Vegas is an exciting market that has become a destination for professional teams and marquee sports events, and we’re proud to bring the inaugural Leagues Cup final to the city,” said MLS Commissioner Don Garber.  “An intense rivalry is developing between Major League Soccer and Liga MX clubs, and Leagues Cup will provide thrilling competition while further elevating the profile of the game in North America. We have no doubt that the support for the historic, first-ever Leagues Cup final from the passionate soccer fans of Las Vegas and surrounding region will be tremendous, and the atmosphere at Sam Boyd Stadium will be electric.”
“Leagues Cup is born out of a historic and growing rivalry between the three countries and two leagues. Therefore, it was very important to have a world-class Final in this first edition, and Las Vegas is a cosmopolitan city that hosts a great number of Mexican fans during Mexican Independence celebrations. LIGA MX is a global league and its clubs have a great number of fans not just in our country but across the globe, especially among the Hispanic community in the United States, given the special place our sport holds among our culture,” said LIGA MX Executive President Enrique Bonilla.  "It’s an opportunity to close out a very Mexican weekend with a great soccer match, which we know will be well represented by our league.”
“Las Vegas is a continually evolving destination, and sports is playing a big part in the next evolution of our city,” said Steve Hill, CEO and president of the LVCVA. “We are excited to play host to the inaugural Leagues Cup and are confident that the flair and energy that only Las Vegas offers will make the match-up a success.”
George Kliavkoff, President of Entertainment & Sports for MGM Resorts International, said, "Major League Soccer and Liga MX offer some of the most exciting professional soccer action worldwide.  Hosting the Leagues Cup in September gives MGM Resorts, and our event partners, another opportunity to showcase Las Vegas as the Sports Capital of the world and how we are able to consistently deliver fans the biggest events."
Sam Boyd Stadium has been host to the Mexican National Team U.S. Tour matches, as well as several other international soccer events in its history.
Tickets to the Leagues Cup Final will be available to the public starting Monday, July 15 at 10 am local time. Fans should visit www.LeaguesCup.com, or www.UNLVTickets.com to purchase tickets to the Final. Tickets to all other Leagues Cup matches are also available at www.LeaguesCup.com.
The tournament has been sanctioned by the Confederation of North, Central America and Caribbean Association Football (Concacaf). Full schedule is below.
Univision and ESPN in the United States and TSN and TVA Sports in Canada will televise Leagues Cup. Televisa will air the event in Mexico on TUDN, Canal 5 and Nu9ve. The event’s broadcast partners will ensure Leagues Cup reaches millions of fans across North America for the inaugural edition of the competition.