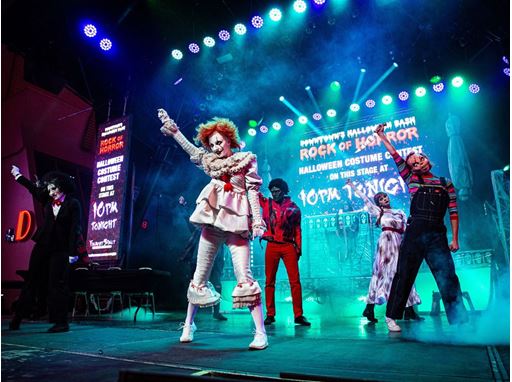 Tricks and Treats Abound in The Entertainment Capital of the World

LAS VEGAS – Las Vegas has plenty of tricks and treats to offer this Halloween, as the holiday weekend promises a fun mix of festivities planned throughout the destination.

From festive fun to fascinating frights, Halloween in Las Vegas is always nothing short of a “Monster Mash” — a graveyard smash — of top-notch entertainment and fabulous revelry.

Here is a sampling of Halloween events and specials being offered throughout the destination in celebration of the Oct. 31 holiday. More information on Halloween offerings in Las Vegas can be found at VisitLasVegas.com.

The experiential art and entertainment complex has plenty of tricks and treats this Halloween. Celebrating 25 years of sexy soirees, the Fetish & Fantasy Halloween Ball returns with its signature lineup of unique performance acts, a roster of top-tier DJs, and some of the best costume eye candy you’ll ever feast on! The venue also boasts a performance by English DJ duo CamelPhat and its regular lineup of otherworldly offerings. A Black Mirror episode just waiting to happen, Meow Wolf’s Omega Mart is where consumerism and creepy collide.

Into sci-fi? Lost Spirits Distillery is a Jules Verne fantasy realized. Complete your night of thrills with a galactic ride on Haley’s Comet zipline, let off some steam at the Dueling Axes throwing lounge, and take a psychic journey of abstract geometry with Museum Fiasco’s immersive “Cluster” audiovisual installation.

Halloween at The Underground

Get into The Great Gatsby spirit this Halloween at The Mob Museum’s speakeasy and distillery, The Underground, where guests are immersed in a Roaring Twenties experience complete with craft cocktails and live entertainment. The downtown lounge celebrates the All-Hallows’ Eve holiday this year with live jazz, a 1920s-era costume contest and playful Halloween-themed refreshments. So, ask the bartender for a Witch’s Brew or A Murder of Crows—after you supply the password at the door, of course. (Hint: It’s Heebie-Jeebies).

On the Record at Park MGM

Park MGM’s speakeasy club experience celebrates Halloween throughout the weekend, with a Haunted Decade Party—featuring a contest for best ’80s or ’90s costume—set for Wednesday night.

The legendary jam band is known for putting on a “musical costume” at its Halloween weekend shows, covering complete albums by recording artists with sounds and influences that are equally as eclectic. Past Halloween shows have featured records by The Who, Talking Heads and David Bowie — the latter at the MGM Grand Garden Arena, where they’ll return for a four-night run from Oct. 28–31.

From the creators of The Official SAW Escape: Las Vegas, the world’s first immersive escape experience based on the Saw film franchise, Escape Blair Witch puts participants in an equally thrilling situation. Inspired by The Blair Witch Project, the 1999 supernatural horror flick that took box offices by storm, the new attraction drops participants into a middle-of-the-forest ranger’s station — and it’s up to them to escape the clutches of the sinister Blair Witch.

If you’re searching for the perfect Halloween photo op experience, look no further. Fulfill your dreams of becoming a horror movie extra at the Museum of Monsters, where attendees can get up close and personal with the likes of Freddy Krueger from A Nightmare on Elm Street, Regan from The Exorcist and many more. Start practicing your very best frightened faces.

The haunts of Freakling Bros. Horror Shows have been terrifying Las Vegas for almost three decades. This Halloween, the local purveyors of fright add a new experience, The Men’s Room, to their award-winning Gates of Hell haunt. Nevada’s first and only R-rated haunted house attraction, Gates of Hell is just one among a trilogy of supreme scares. Coven of 13 and Castle Vampyre complete this year’s offerings, giving fright-seekers a dash of spooky spells and some blood-sucking surprises to round out their haunting experience.

Looking for a bone-chilling thrill? Zak Bagans’ The Haunted Museum is filled with spooky artifacts that would even give Ed and Lorraine Warren (of The Conjuring fame) some serious nightmares. The final resting place for haunted items (like Bela Lugosi’s cursed mirror and the fake teeth of notorious cult leader Charles Manson), the museum adds creepy lighting and theatrics to give the curious the goosebumps they’ve been longing for.

Looking to show off that costume to all your followers? Take some ‘Gram-worthy pics at the Museum of Selfies, which boasts themed decorations and a new Halloween attraction starting in mid-October. Museum guests wearing costumes on Halloween receive a $5 discount on entry to the museum, located at The LINQ Promenade.

Are you still waiting for your letter from Hogwarts School of Witchcraft and Wizardry? Well, until that owl shows up with some prize postage, consider Potted Potter: The Unauthorized Harry Experience. This hilarious parody jams all the drama, suspense, magic, and mayhem of the seven-book Harry Potter series into 70 minutes of knee-slapping theater that will have Gryffindors and Slytherins alike in stitches.

The off-Strip hotel presents the Las Vegas stop of The Emo Night Tour. Rock out front and center at Virgin Hotels Las Vegas’ Event Lawn, where attendees can dance the night away to tracks by alt/punk favorites like Taking Back Sunday and Fall Out Boy.

The Rock of Horror Halloweekend celebration at Fremont Street Experience, located under the Viva Vision canopy in downtown Las Vegas, features four nights of tricks and treats, from haunts and flash mobs to live entertainment and theatrical performances.

Temple of Zouk at Resorts World

It’s all just a bunch of “hocus pocus,” right? Well, witches aren’t the only ones who know how to “put a spell” on you with some trance-like beats. Resorts World’s newly minted Zouk Nightclub features international superstar Tiësto on the decks this All-Hallows’ Eve, with G Eazy, DJ Snake and The Martinez Brothers also spinning spellbinding sounds throughout the celebratory weekend.

Looking to “Get Low” on the dance floor this Halloween weekend? The GRAMMY Award-winning rapper and DJ brings his infectious energy to the nightclub inside MGM Grand Hotel and Casino for a Friday night Halloween celebration.

Cross over to the Wynn Nightlife Zone and step into an alternate dimension of the Encore nightspot, as it receives a spooky transformation for Halloween. Chart-topping DJ talent completes the celebration, with The Chainsmokers, Kygo and Diplo all headlining throughout the weekend.

The Venetian Las Vegas’ nightclub celebrates the spooky side of bold fashion trends this Halloween. Better yet, Brody Jenner of The Hills fame plays host for an evening and the nightspot will award a cash prize for the most terrifyingly tasteful costume.

Possibly the most apropos Halloween dining destination, the Virgin Hotels Las Vegas cantina boasts a Día de los Muertos theme and frighteningly delicious fare to pair. Start with a Smoky Paloma and move on to enjoy the Mexican eatery’s traditional cuisine before ending with some Salted Caramel Churros.

The Sand Dollar Lounge, a Las Vegas landmark known for drawing musical icons like B.B. King and Mick Jagger, is putting on a costume of sorts itself. Throughout October the legendary bar and lounge will be transformed into “Nightmare on Spring Mountain,” a Halloween pop-up covering the space in themed lighting and décor. The lounge, minutes from the Strip on Spring Mountain Road, is also featuring special Halloween-inspired cocktails and special events throughout the month.

Off The Strip Bistro & Bar is serving Halloween-themed cocktails for the spookiest time of year. Even Snow White would want a sip of the Poison Apple, a fruity blend of Apple Pucker, Captain Morgan, pineapple juice, Sprite and simple syrup dressed up with a red sugar rim. I LOVE SUGAR also offers themed libations with Halloween candy inspired cocktails at its Candy Martini Bar, made with Jolly Rancher- and candy corn-infused spirits. And the authentic southern ‘cue isn’t the only thing that’s scary good at Virgil’s Real Barbecue this Halloween. Get festive with Virgil’s Bloody Bath Punch, a gallon-sized cocktail that serves up to six people.

Sammy Hagar’s Strip-side bar and restaurant at the Miracle Mile Shops at Planet Hollywood Resort & Casino is getting in the Halloween spirit with themed cocktails. Presented with dry ice and garnished with gummy worms and candy eyeballs, the Pocion de Bruja (or “The Witch’s Potion”) offers fun presentation and some tasty treats. Or opt for the Black Widow, an indulgent tequila-based concoction with Cazodores Blanco, Godiva dark chocolate and both Kahlua and Tuaca liqueurs.

The luxury shopping destination celebrates Halloween by bringing back its complimentary and family-friendly Trick or Chic walkthrough experience. The Strip-side mall also features a light show in its Great Hall choreographed to the smash Halloween hit “Monster Mash.”

Night of the Living Dead meets Night of the Living Wed at The Little Vegas Chapel, where a zombie Elvis officiant will bring couples together in spooky matrimony (Oct 25-Nov. 1). Brides and grooms can go all in with the chapel’s Halloween Package, which includes a black veil, dead flower bouquet and boutonniere, and a photo with a skeleton chauffeur in the chapel’s pink Cadillacs. It’s a Tim Burton nuptial fantasy.

A Chapel of Love

Halloween-themed weddings get even more macabre at A Chapel of Love, where a costumed Grim Reaper officiates all “Scare-amony” weddings Oct. 17-31. The Arts District chapel’s Halloween-inspired wedding package is complete with spooky décor, Halloween bouquet/boutonniere and more. Everyone wants a little hocus pocus on their special day, right?

For more Halloween fun and fall entertainment, check out VisitLasVegas.com.