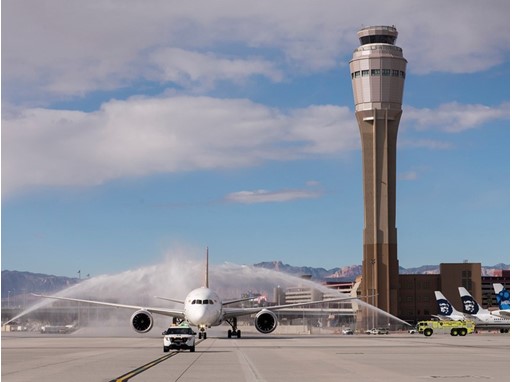 LAS VEGAS -- History was made today when Hainan Airlines’ first flight from Beijing to Las Vegas touched down at McCarrran International Airport filled with excited Chinese travelers, media and company officials. A traditional water arches salute greeted the aircraft as it taxied to the gate on Dec. 2, 2016.
“We have just made history,” said Mr. Hou Wei, Senior Vice President of Hainan Airlines, “flying the first commercial aircraft from Mainland China to Nevada, finally linking the capital of the People’s Republic of China with the entertainment capital of the world, Las Vegas!”
With China considered to be one of the leading growth markets for visitation to Las Vegas, the accessibility of the new route introduces Las Vegas to millions of prospective visitors and will be instrumental to increase international visitation. It has been a longtime goal of Las Vegas to have a direct route from the historic Chinese capital. Previously travelers between the two points had to connect via a third U.S. or Asian city.The new route cuts hours off the previous travel time.The service operates Mondays, Wednesdays and Fridays. Demand for the inaugural flight was so high that the airline switched to a larger aircraft, a Boeing 787-9, with an additional 76 seats, to accommodate everyone.
“Today’s arrival is the culmination of many years of hard work, ushering in a new era of connectivity between Las Vegas and China,” said Rosemary Vassiliadis, Director of Aviation for Clark County, Nev. “McCarran has expanded its international capability specifically for moments such as today, and with the amenities of our new Terminal 3, as well as custom-created Chinese signage and Mandarin-speaking ambassadors, we’re confident that Hainan’s passengers will enjoy an unparalleled airport experience beginning the moment they enter McCarran, and again before they return home.”
Chinese travelers are one of the fastest-growing and largest-spending groups of international visitors to Las Vegas. With the reciprocal 10-year tourist visas and the introduction of hotels, programming and amenities geared toward Chinese visitors, Las Vegas has established itself as a major draw for Chinese traveling to the United States.
“We are thrilled to welcome direct service between China and Las Vegas with the new route from Hainan Airlines,” said Rossi Ralenkotter, president/CEO of the Las Vegas Convention and Visitors Authority (LVCVA.) “China is a very important market for Las Vegas. Expanding air service is a long-term process, and we share this successful achievement with the talented teams from Hainan, the LVCVA and with all of our resort and allied partners. Our partnership offers additional flexibility and convenience and increases opportunity for future growth.”
Special introductory fares from Las Vegas also make China accessible to residents of Las Vegas.
Hainan flight 7970 departs McCarran International Airport at 1:10 p.m. and arrives at Beijing’s Capital Airport at 6:10 p.m. the subsequent day, allowing for connections to other points in China. Flight 7969 departs Beijing at 2:40 p.m. and arrives in Las Vegas at 10:50 a.m. the same day. Las Vegas times are one hour later during the summer season. Nonstop flight time is approximately 13 hours westbound and 12 hours eastbound. (Friday flights depart and arrive 55 minutes later.)
The new route features Boeing 787-8 Dreamliners with 36 business class lie-flat seats and 177 economy class seats. Hainan is the airline with the most nonstop 787 Dreamliner routes between China and North America.
Hainan Airlines is Mainland China’s largest independent airline, and is the only Mainland Chinese airline with a perfect five-star rating from Skytrax, the international airline ratings agency, six years in a row. Members of Alaska Airlines’ Mileage Plan may earn or redeem points on Hainan Airlines flights.
Business class passengers enjoy priority check-in and can reserve complimentary private chauffeured car service between home, the airport and their destination in both the U.S. and China. Michelin-inspired gourmet Chinese and Western cuisine as well as award-winning wines, freshly brewed espresso and high-quality teas are available inflight. A state of the art entertainment system offers more than 100 movies, audio selections and games on demand.
###
About Hainan Airlines
Hainan Airlines was founded in 1993 and has grown to be China’s largest independent airline, with a fleet of over 170 aircraft, including wide body Boeing 787 Dreamliner and Airbus A330 jetliners. The airline is a subsidiary of the HNA Group, a Global Fortune 500 company from China, which has interests in logistics, tourism, hotels, financial services, as well as air transportation.
Hainan began service to the United States in 2008 and has progressively grown internationally, transporting hundreds of thousands of passengers to and from China and North America. The airline has a wide domestic network in China, serving more than 500 routes linking 100 cities, as well as points in Europe, Southeast Asia, Australia and the Middle East. Hainan prioritizes elite-level service, earning numerous awards for safety, punctuality and a high-quality product. More information is available at www.hainanairlines.com.
About McCarran International Airport
McCarran International Airport is located in the shadows of the world-famous Las Vegas Strip and is the gateway for nearly half of the people who visit Southern Nevada each year. Including arrivals and departures, McCarran hosted more than 45 million passengers in 2015, making it the eighth-busiest airport in North America. With 30 airlines providing nonstop service to more than 140 destinations, McCarran makes it possible for the world to experience one of the most alluring travel destinations. McCarran International Airport is owned and operated by Clark County, Nevada, and does not benefit from local tax dollars.
About the LVCVA
The Las Vegas Convention and Visitors Authority (LVCVA) is charged with marketing Southern Nevada as a tourism and convention destination worldwide, and also with operating the Las Vegas Convention Center and Cashman Center. With nearly 150,000 hotel rooms in Las Vegas alone and more than 11 million square feet of meeting and exhibit space citywide, the LVCVA's mission centers on attracting ever increasing numbers of leisure and business visitors to the area. Download the virtual reality app, Vegas VR, to experience Las Vegas from your iPhone or Android by visiting http://www.vrtv.vegas/. For more information, go to www.lvcva.com or www.lasvegas.com.
Media Contacts:
Joel Chusid
joel@hnair.com
(214) 284-9499 (mobile)
Chris Jones
chrisjo@mccarran.com
(702) 261-5290
Heidi Hayes
hhayes@lvcva.com
(702) 892-7669