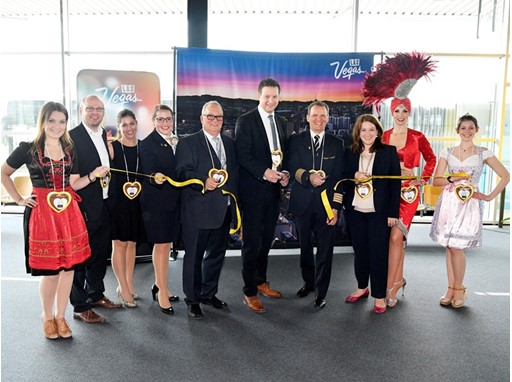 LAS VEGAS -- Condor Airlines celebrated its first nonstop flight from Munich to Las Vegas on Wednesday, May 3, 2017. The flight will operate twice a week, every Wednesday and Saturday, introducing Las Vegas to prospective German and European visitors.  Including existing nonstop flights from Frankfurt, Condor Airlines now offers six nonstop flights from Germany to Las Vegas.
“We are excited to see our partnership with Condor Airlines continue to expand with the direct flight from Munich to Las Vas Vegas,” said Cathy Tull, senior vice president of marketing for the Las Vegas Convention and Visitors Authority. “With this new route, we are anticipating more than $13.1 million in annual economic impact. International accessibility through non-stop service is key to keeping Las Vegas top of mind for millions of potential visitors throughout Germany and Europe.”
The Boeing 767-300 will provide economy, premium, and business class seating. All Condor passengers receive complimentary checked baggage, complimentary beverages and meals and complimentary in-flight entertainment. Condor’s business class features reclining seats (170 degrees), a personal in-seat, premium touch-screen (15 inches) entertainment system, power and USB ports at every seat and gourmet, five-course meals with complimentary wine, beer and cocktails and an in-flight, well-being amenity kit. Business class passengers also have access to priority check-in and business class lounges at most airports. Premium class features seats with added legroom, leg rests and adjustable headrests, a premium in-flight, in-seat entertainment system with an extended program, USB ports at every seat, premium meals and complimentary beverages and an in-flight, well-being amenity kit.
“The North American market is really interesting for us and so we are glad to amplify the Condor flight offer there this summer,” added Jens Boyd, Group Head of Long-Haul at Condor. “With the news direct flights from Munich, Condor can now easily serve demands from the south of Germany and even Austria.”
The flight to Munich departs McCarran International Airport at 10:25 p.m. and arrives in Munich at 6:55 p.m. the subsequent day.  A second flight is available on Saturdays departing at 2:15 p.m. and arriving in Munich at 10:45 a.m. the next day. Affordable flights for the Summer 2017 season can be booked at www.condor.com.
About the LVCVA
The Las Vegas Convention and Visitors Authority (LVCVA) is charged with marketing Southern Nevada as a tourism and convention destination worldwide, and also with operating the Las Vegas Convention Center and Cashman Center.  With nearly 150,000 hotel rooms in Las Vegas alone and more than 11 million square feet of meeting and exhibit space citywide, the LVCVA's mission centers on attracting ever increasing numbers of leisure and business visitors to the area. Download the virtual reality app, Vegas VR, to experience Las Vegas from your iPhone or Android by visiting http://www.vrtv.vegas/.   For more information, go to www.lvcva.com or www.visitlasvegas.com.
About McCarran International Airport
McCarran International Airport is located in the shadows of the world-famous Las Vegas Strip and is the gateway for nearly half of the people who visit Southern Nevada each year. Including arrivals and departures, McCarran hosted more than 45 million passengers in 2015, making it the eighth-busiest airport in North America. With 30 airlines providing nonstop service to more than 140 destinations, McCarran makes it possible for the world to experience one of the most alluring travel destinations. McCarran International Airport is owned and operated by Clark County, Nevada, and does not benefit from local tax dollars.