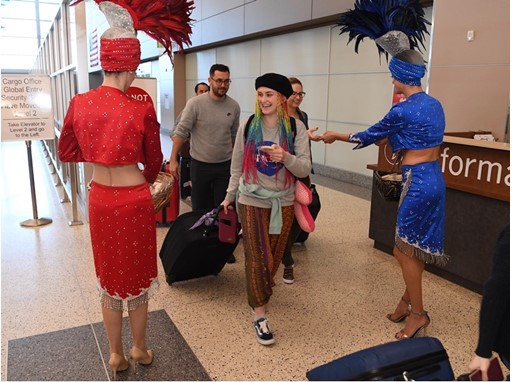 LAS VEGAS – British Airways launched a new nonstop service to Las Vegas from London-Gatwick (LGW) today, March 27, 2018. This flight will operate three times a week through October 26, 2018 and is expected to have an overall economic impact of $48,907,000 to Southern Nevada.
As an essential market for Las Vegas, visitation from the United Kingdom remains strong and is the top source for overseas visitation to the destination and third overall internationally. In 2016, we welcomed more than 753,000 guests from the United Kingdom to Las Vegas.
About LVCVA
The Las Vegas Convention and Visitors Authority (LVCVA) is charged with marketing Southern Nevada as a tourism and convention destination worldwide, and also with operating the Las Vegas Convention Center and Cashman Center.  With nearly 150,000 hotel rooms in Las Vegas alone and more than 11 million square feet of meeting and exhibit space citywide, the LVCVA's mission centers on attracting ever increasing numbers of leisure and business visitors to the area. Download the virtual reality app, Vegas VR, to experience Las Vegas from your iPhone or Android by visiting http://www.vrtv.vegas/.   For more information, go to www.lvcva.com or www.visitlasvegas.com.
About McCarran International Airport
McCarran International Airport is located in the shadows of the world-famous Las Vegas Strip and is the gateway for nearly half of the people who visit Southern Nevada each year. Including arrivals and departures, McCarran hosted a record of 48.5 million passengers in 2017, making 2017 the the busiest year in the airport's 70-year history. With 29 airlines providing nonstop service to more than 140 destinations, McCarran makes it possible for the world to experience one of the most alluring travel destinations. McCarran International Airport is owned and operated by Clark County, Nevada, and does not benefit from local tax dollars.