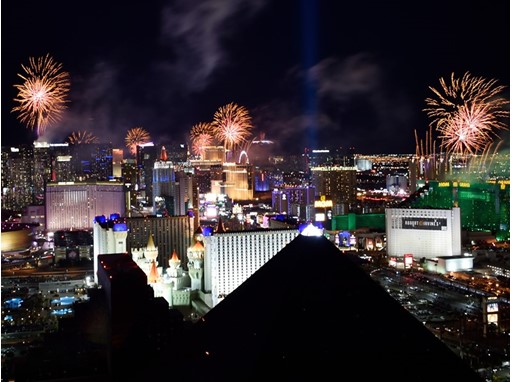 LAS VEGAS -- Las Vegas Events, the Las Vegas Convention and Visitors Authority, and Fireworks by Grucci brought “America’s Party 2019,” to Las Vegas at midnight on January 1, 2019 with a  fireworks and entertainment extravaganza to ring in the New Year in classic Las Vegas style.  America’s Party encompassed both live entertainment at the Fremont Street Experience and the much-anticipated fireworks show on the Las Vegas Strip. The pyrotechnic display launched from seven rooftop locations, including (from the south, heading north): MGM Grand; Aria; Planet Hollywood; Caesars Palace; Treasure Island; The Venetian; and the Stratosphere.