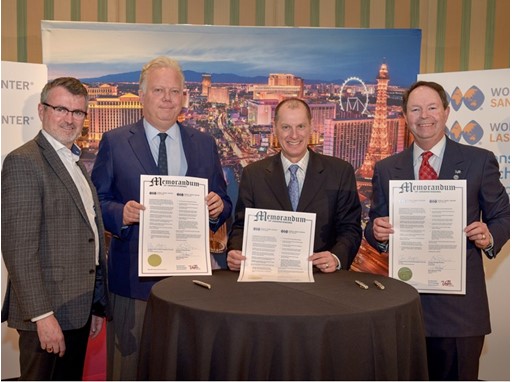 LAS VEGAS – The Las Vegas Convention and Visitors Authority (LVCVA) and the Consumer Technology Association (CTA)® launched the World Trade Centers Association (WTCA) 48th General Assembly on Sunday, April 2, with an official Memorandum of Understanding (MOU) between the World Trade Center Las Vegas and the World Trade Center Santiago.  The partnership will help enhance international business relationships between the two destinations.
The WTCA encourages mutual assistance and cooperation among its members.  Through the agreement, Las Vegas and Santiago will co-market under the World Trade Center brand creating access to key trade information, market research, and facilitate business trade missions around the world.
The MOU signing ceremony helped kick off the General Assembly held April 2-5 at the Las Vegas Convention and World Trade Center.  The annual event drew more than 200 registrants representing 90 different WTCs from around the world.  With an estimated 90-percent of the participants hailing from outside of the United States, this year's attendants represented 33 countries including Canada, Mexico, Argentina, Brazil, Bolivia, Chile, Paraguay, Uruguay, Panama, Ireland, Sweden, Switzerland, Netherlands, Finland, Holland, Germany, France, Italy, Spain, Gibraltar, Turkey, Cyprus, China, Korea, Taipei, India, Saudi Arabia, Qatar, Algeria, Ghana, Australia and Philippines.
Featured speakers during the opening session included: Rossi Ralenkotter, president/CEO, LVCVA; Gary Shapiro, president/CEO, Consumer Technology Association; Richard Swanson, director, Pacific South Network, U.S. Commercial Services; Kristopher Sanchez, director of international trade, State of Nevada; Jonas Peterson, president/CEO, Las Vegas Global Economic Alliance.
In 2010, the LVCVA and CTA®, producers of CES®, signed an agreement designating the Las Vegas Convention Center as an official WTC site to attract more international visitors and trade events to Las Vegas.  International visitation is a critical growth market for Las Vegas.  Currently, 16-percent, or nearly seven million of all Las Vegas visitors are international travelers, and over next decade, the LVCVA's goal is to increase that figure steadily. Through the agreement, CTA became an official member of the WTCA and the LVCVA became the official representative of the trade center site.  Las Vegas is the only destination in North America with a WTC designation on the campus of a convention center.
In addition to the MOU with WTC Santiago, the WTC Las Vegas has signed memorandums of understanding with WTC Montevideo, WTC Dulles Airport, WTC Taipei, WTC Mexico City, WTC Brussels, WTC Beijing, WTC Miami, WTC Istanbul, WTC Seoul, WTC Sao Paulo and WTC Ft. Lauderdale.
The LVCVA also has a Memorandum of Understanding with the U.S. Department of Commerce's International Trade Administration to promote travel and tourism exports.
ABOUT THE World Trade Center Las Vegas
The World Trade Center Las Vegas is a partnership between the Las Vegas Convention and Visitors Authority (LVCVA) and the Consumer Electronics Association (CTA)®, producer CES®, the world's leading innovation event. In addition to marketing and branding Southern Nevada as a tourism and convention destination worldwide, the LVCVA operates the Las Vegas Convention Center, the nation's only convention center designated as a World Trade Center site and one of the largest convention centers in the United States. Together, the LVCVA and CEA market Las Vegas to business travelers around the globe under the World Trade Center brand.  For more information, visit www.vegasmeansbusiness.com and www.cta.tech.
ABOUT THE LVCVA
The Las Vegas Convention and Visitors Authority (LVCVA) is charged with marketing Southern Nevada as a tourism and convention destination worldwide, and also with operating the Las Vegas Convention Center and Cashman Center.  With nearly 150,000 hotel rooms in Las Vegas alone and more than 11 million square feet of meeting and exhibit space citywide, the LVCVA's mission centers on attracting ever increasing numbers of leisure and business visitors to the area. Download the virtual reality app, Vegas VR, to experience Las Vegas from your iPhone or Android by visiting http://www.vrtv.vegas/. For more information, go to www.lvcva.com or www.visitlasvegas.com