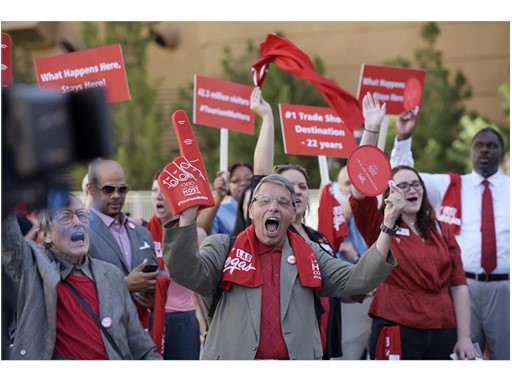 LAS VEGAS -- In 2015, Las Vegas welcomed a record-breaking 42.3 million visitors. The travel and tourism industry supports more than 368,000 jobs in Southern Nevada and generates $14.9 billion in local wages and salaries. On May 1-7, Las Vegas joined the U.S. Travel Association - and the rest of the country - in recognizing National Travel and Tourism Week.

To celebrate the industry and the people who work in it, the Las Vegas Convention and Visitors Authority (LVCVA) hosted a series of events and activations in conjunction with National Travel and Tourism Week. Events included a rally on the Las Vegas Strip at the Toshiba Plaza with updates from key industry leaders, and a flash mob downtown at the Fremont Street Experience. Several landmarks and properties turned red, the color selected to represent unity in the industry. The LVCVA surprised visitors with special giveaways as a "thank you" for choosing Las Vegas as a travel destination. The organization also once again awarded Hospitality Hero awards to dozens of frontline employees at hotels and attractions in recognition of their superior customer service.