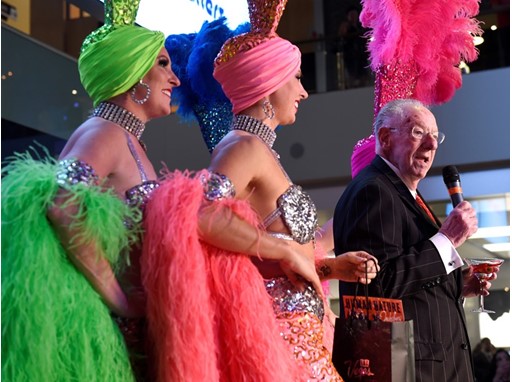 LAS VEGAS – The impact of travel and tourism in Southern Nevada was bigger than ever before in 2016, as Las Vegas welcomed a record-breaking 42.9 million visitors, including a record 6.3 million meetings and convention delegates, which resulted in an estimated $60 billion in local economic impact. The travel and tourism industry supported more than 407,000 jobs in Southern Nevada and generated $16.9 billion in local wages and salaries. On May 7-13, Las Vegas joins the U.S. Travel Association, and destinations across the country, in recognizing National Travel and Tourism Week (NTTW). This year’s NTTW theme is “Faces of Travel.”
To celebrate the industry and the people who work in it, the Las Vegas Convention and Visitors Authority (LVCVA) is hosting a series of events and activations in conjunction with NTTW. Here are highlights of the week’s activities and celebrations, May 9-13, 2017.
Tourism Rally (Tuesday, May 9, 2-3 p.m.)
On Tuesday, May 9, from 2-3 p.m., the LVCVA hosted its annual rally in celebration of tourism in the Great Hall at Fashion Show Las Vegas, 3200 S. Las Vegas Boulevard.
The rally will feature performance vignettes by cast members of Las Vegas stage shows BAZ – Star Crossed Love, The Australian Bee Gees Show, and a cappella group Vox Vegas. Additionally, the cast of Chippendales, Defending the Caveman, FANTASY at Luxor Hotel and Casino, and Marriage Can Be Murder will interact with and entertain the crowd. Throughout the hour-long celebration, Fashion Show Las Vegas vendors including Davidoff of Geneva, Optica and Professional Massage, Inc. will provide special giveaways and discounts for NTTW Rally supporters. Local businesses, shows and attractions committed to providing giveaways for the event include:
Guests are encouraged to wear red to the rally, signifying unity amongst the travel industry. Last year’s event attracted nearly 150 attendees.
“Go Red” for Tourism (Tuesday, May 9)
Per the U.S. Travel Association, the color red represents unity in our industry among travel and tourism workers and supporters coast-to-coast. In support of NTTW, community members are encouraged to wear red during Travel Rally Day on Tuesday, May 9.  Marquees and billboards throughout Las Vegas will boast NTTW messaging. Additionally, businesses and landmarks throughout the community are also encouraged to turn signs, lights and decorations red to mark the occasion. Community partners committed to “going red” include:
Hospitality Heroes
The LVCVA is excited to celebrate the 10th anniversary of its Hospitality Heroes program this year. Launched in 2008, Hospitality Heroes recognizes those in the tourism industry who have gone above and beyond to provide the best customer service to our nearly 43 million annual visitors. Over the past 10 years, the program has recognized 429 people employed in the travel and tourism industry in Southern Nevada. Throughout the month of May, the LVCVA will continue this tradition and recognize 46 frontline employees at hotels and attractions by surprising them on the job with a Hospitality Hero award. Please contact Maria Phelan if you would like to profile a Hospitality Hero.
Blood Drive Challenge for Tourism Kick-Off (Friday, May 12)
The Las Vegas Host Committee will partner with United Blood Services and kick off the second annual Blood Drive Challenge for Tourism, themed “Tourism is the lifeblood of Southern Nevada’s economy.” This initiative invites Las Vegas Host Committee Ambassadors and industry partners to show the strength of Las Vegas’ tourism industry.
Helldorado Days Parade (Saturday, May 13, 10 a.m.)
The LVCVA will end National Travel and Tourism Week by participating in the Helldorado Days parade. Employees and Host Committee Ambassadors will be invited to walk with the LVCVA float, which will be themed “Faces of Helldorado Days.”
ABOUT THE LVCVA
The Las Vegas Convention and Visitors Authority (LVCVA) is charged with marketing Southern Nevada as a tourism and convention destination worldwide, and also with operating the Las Vegas Convention Center and Cashman Center. With nearly 150,000 hotel rooms in Las Vegas alone and more than 11 million square feet of meeting and exhibit space citywide, the LVCVA's mission centers on attracting ever increasing numbers of leisure and business visitors to the area. Download the virtual reality app, Vegas VR, to experience Las Vegas from your iPhone or Android by visiting http://www.vrtv.vegas/. For more information, go to www.lvcva.com or www.visitlasvegas.com.