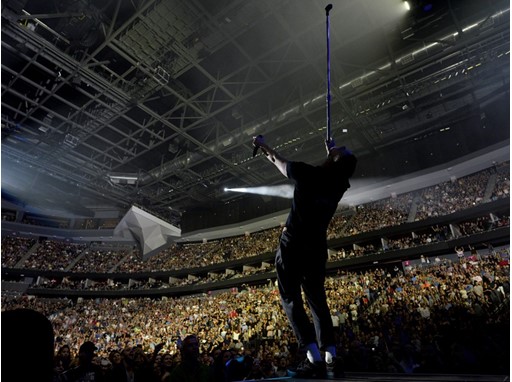 LAS VEGAS - Imagine Dragons made a triumphant return to their hometown of Las Vegas with a tour stop at the T-Mobile Arena on Friday, Sept. 29. 2017. The performance was part of a tour to promote the band's third album, Evolve, which debuted on June 23.

Formed in 2009 and featuring lead vocalist Dan Reynolds, guitarist Wayne Sermon, bassist Ben McKee, and drummer Daniel Platzman, Imagine Dragons earned a grassroots following by independently releasing a series of EPs. After Alex Da Kid signed them to his KIDinaKORNER/Interscope label, the band made its major-label debut with the release of Continued Silence, a 2012 EP featuring the 2x platinum breakthrough single "It's Time." Night Visions arrived later that year and Imagine Dragons found themselves on a skyward trajectory that saw the album debut at No. 2 on the Billboard Top 200 Albums chart and became the No. 1 album on Spotify Worldwide for 2013. Night Visions has sold more than 5 million copies worldwide. The album's second single, the 9x-platinum "Radioactive," hit No. 1 on the Billboard Rock chart and earned the band a 2014 GRAMMY for "Best Rock Performance." The third single, "Demons," hit No. 1 on Alternative and Top 40 radio, and has sold 3.9 million copies in the U.S. Imagine Dragons' platinum-selling second album, Smoke + Mirrors, debuted at #1 on the Billboard Top 200 album chart and has sold 1.1 million copies worldwide.
Photography by Sam Morris/Las Vegas News Bureau