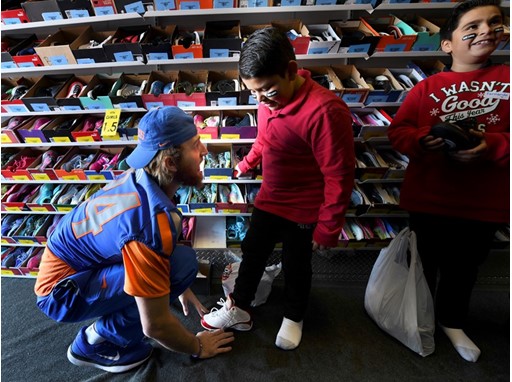 LAS VEGAS -- Players from the University of Oregon and Boise State celebrated the 26th Las Vegas Bowl by giving back to the community hosting them this week, while preparing for the their Dec. 16 matchup at Sam Boyd Stadium with pep rallies and special events.
A group that included players from Boise State Broncos and Oregon Ducks visited Opportunity Village on Dec. 13. Founded in 1954, Opportunity Village is a not-for-profit organization that serves people in the Southern Nevada community with intellectual disabilities, to enhance their lives and the lives of their.  Opportunity Village is dedicated to helping people with severe intellectual and related disabilities become the very best they can be. Through vocational training, community employment, day services, advocacy, arts and social recreation, citizens with severe disabilities are able to find new friends, realize future career paths, seek independence and community integration and unleash creative passions.
On Dec. 14, Staffers and players from both teams assisted the Goodie Two Shoes Foundation in providing more than 850 disadvantaged children from the Las Vegas area with much-needed new shoes, socks and other supplies. Kids were sized and then selected their new pair of shoes from the Goodie Two Shoes semi-truck with the help from the Broncos and Ducks. MRG Marketing & Management Inc., Southwestern franchise partner of Raising Cane’s Chicken Fingers, Las Vegas Bowl and Goodie Two Shoes Foundation continue their annual partnership to brighten the holidays of underprivileged children at C.P. Squires Elementary School in North Las Vegas. As a result of a Raising Cane’s “Dollar Donation” initiative in November, more than 850 children will receive new shoes, socks and toys thanks to the $62,000 raised and donated by MRG’s Las Vegas Raising Cane’s restaurants and their patrons.
The University of Oregon Ducks (7-5) will return to the Las Vegas Bowl for the first time in more than a decade when the Pac-12 Conference representative takes on Mountain West champion and 25th-ranked Boise State Broncos (10-3) in the 26th edition of the Las Vegas Bowl. The game will be played Saturday, Dec. 16, at 12:30 p.m. PT, and will air on ABC. The Broncos will play in the Las Vegas Bowl for the first time since winning three straight appearances from 2010-12. The Ducks, who will serve as the home team, have split their two previous trips, downing Air Force in 1997 and falling to BYU in 2006. The Las Vegas Bowl will mark just the third meeting between these two western powers. Boise State won both previous games, 37-32 in Eugene in 2008 and 19-8 in Boise to open the 2009 season, which ended with a Fiesta Bowl victory by the Broncos.