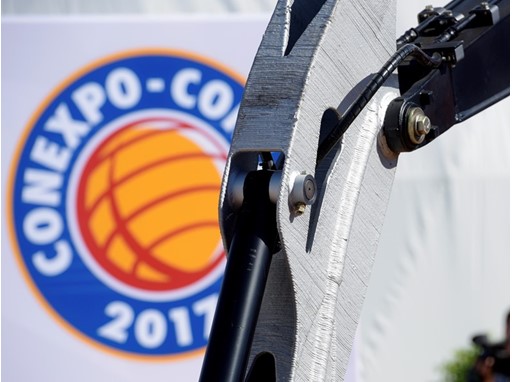 LAS VEGAS -- The Las Vegas Convention Center’s Diamond Lot (the former Riviera Hotel and Casino site) will serve as exhibition space for the first time as CONEXPO-CON/AGG returns to the destination March 7-11, 2017. CONEXPO-CON/AGG is expected to bring approximately 129,000 attendees to Las Vegas, with direct visitor spending of approximately $120.4 million and total jobs supported estimated at 1,458. The expo will use approximately 2.8 million net square feet of space at the convention center, welcoming more than 2,500 exhibitors representing every major construction industry. CONEXPO-CON/AGG is the destination’s largest show when it comes to Las Vegas every three years, and this year’s move-in at the Diamond Lot was captured via time-lapse.
In late 2016, the Nevada State Legislature approved legislation to help fund the expansion and renovation of the Las Vegas Convention Center. The project will add 600,000 square feet of exhibit space on the current Diamond Lot area, new meeting rooms and other amenities, and will include renovation of the entire existing property. The project will continue to cement Las Vegas as North America’s premier business destination, allowing shows to grow in both square footage and attendance. The development of the state-of-the-art facility is expected to generate more than 13,800 construction jobs and support 7,800 full-time permanent jobs. The launch of the Diamond Lot in January 2017 finalized Phase I of the Las Vegas Convention Center District (LVCCD) project.