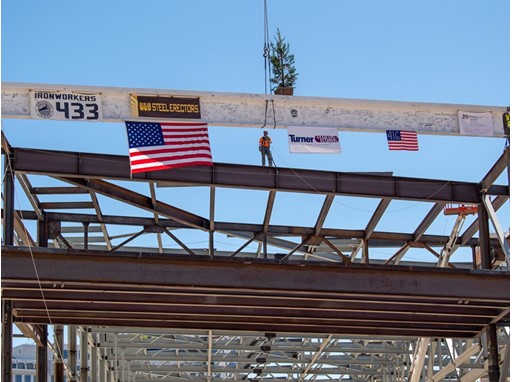 LAS VEGAS -- Turner/Martin-Harris, a joint venture and contractor for the Las Vegas Convention Center District (LVCCD) Expansion project, recognized the tradesmen and tradeswomen bringing the project to reality on Aug. 20, 2019. The tradesmen and tradeswomen signed a commemorative “final” beam that was hoisted into the expansion project’s new 600,000-square-foot exhibit hall. The LVCCD program includes the 1.4 million-square-foot expansion project and the renovation of the Las Vegas Convention Center’s existing 3.2 million square feet. The total budget for the LVCCD program is $1.475 billion. The raising of the beam in the new exhibit hall celebrates a significant milestone in the completion of the expansion project. In the fall, the Las Vegas Convention and Visitors Authority (LVCVA) will recognize the official “topping off” of the entire expansion project. The event included comments from:Guy Martin, president of Martin-Harris Construction;  Dewey Newton, senior vice president, Turner Construction; and Brian Yost, chief operating officer, Las Vegas Convention and Visitors Authority.
Additional images: LVCVA CEO/President Steve Hill and Clark County Commissioner and LVCVA Board Chairman Larry Brown were unable to attend the Aug. 20 event and signed their names to the beam on Aug. 13, 2019.