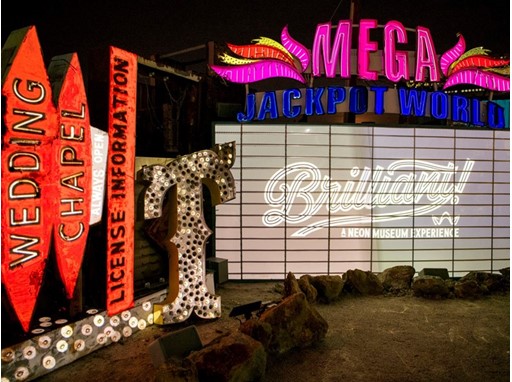 LAS VEGAS -- A 360-degree audiovisual immersion experience that uses technology advances to reanimate 40 monumental examples of the Neon Museum’s iconic vintage signs. The largest augmented reality experience of its kind was designed by using projection mapping to illuminate and re-electrify unrestored, non-working and in some cases broken signs. Incorporating archival footage from the Las Vegas News Bureau, the experience transports guests directly into Las Vegas’ history, where static signs come to life while accompanied by music from some of the entertainment industry’s most storied performers.
Experiential Designer Craig Winslow, selected as one of Adobe’s 2016 – 2017’s Creative Residents, previously created a smaller-scale, one-night-only projection for the North Gallery in February 2017. That work was part of a larger, site-specific series called “Light Capsules,” where he uses projection mapping to revive “ghost signs”—unrestored, faded, no longer legible painted signs on buildings.  After seeing his eye-catching artistry applied to its neon signs, the museum began discussions with Winslow about creating a permanent projection-mapping experience for visitors. The technology features:
Structured light scanning obtained a precise view of the projectors' output, before fine-tune warping the content to perfectly align to the actual surfaces—the bulbs, bent metal and broken neon tubes of the signs in the gallery. This process, known as projection mapping, aligns digital animations to the physical world, allowing signs that have not been illuminated for decades to shine once again.
Featured songs include: “Luck Be a Lady” and “This Town,” Frank Sinatra; “Heartbreak Hotel,” “Night Life” and “Viva Las Vegas,” Elvis Presley; “Ain’t That a Kick in the Head” and “I Love Vegas,” Dean Martin; “L-O-V-E,” Nat King Cole; “The Good, The Bad and the Ugly,” Ennio Morricone; “Ring of Fire,” Johnny Cash;  “Route 66,” Natalie Cole; “Strangers in the Night,” Liberace;  “I’m Beginning to See the Light,” The Ink Spots, Ella Fitzgerald;  “The Bitch Is Back,” Elton John; “Only You (And You Alone),” The Platters; “Mr. Bojangles,” Sammy Davis Jr.; “Mister Sandman,” The Chordettes; “Vegas Lights,” Panic at the Disco.