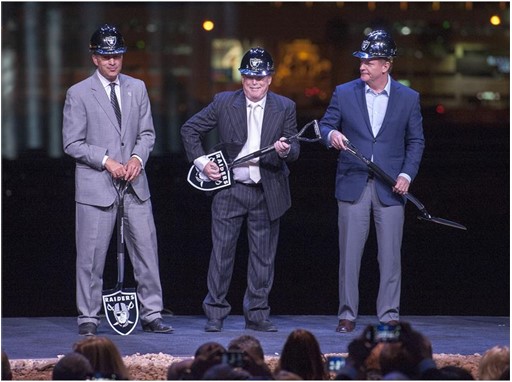 LAS VEGAS -- During what Nevada Gov. Brian Sandoval called "one of the most transformative moments in the history of Las Vegas," NFL Commissioner Roger Goodell and Raiders owner Mark Davis joined Sandoval to break ground on a new home for the Raiders in Las Vegas.
The Nov. 13 ceremony was held after sunset on the site of the proposed $1.9 billion stadium located on 62.5 acres near I-15 and McCarran International Airport. The stadium is scheduled to become the team's new home by 2020.
Davis opened the ceremony with a moving salute to the community of Las Vegas and the first responders who pulled together in the wake of  the 1 October tragedy. "The Raiders are proud and honored to be joining such a special team. This is our field of dreams," Davis said. The ceremony was set against a backdrop of the Las Vegas Strip, with a field of 58 spotlights representing the victims of 1 October illumintating the evening sky.
Also participating in the event were Las Vegas Mayor Carolyn G. Goodman; Clark County Commissioner Steve Sisolak; Steve Hill, chairman of the Las Vegas Stadium Authority; and Marc Badain, president of the Raiders organization.
In 2016, Nevada State lawmakers approved a bill paving the way for development of the Las Vegas Convention Center District, a $1.4 billion project that will add 600,000 square feet of new meeting space and secure Las Vegas’ position as the world’s premier business destination. The bill also included provisions for the development of a $1.9 billion, 65,000-seat stadium that could house the University of Nevada, Las Vegas football team as well as a potential professional football franchise and a variety of special events.