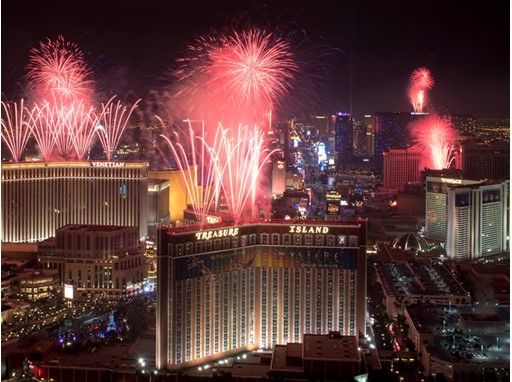 LAS VEGAS -- The skies over Southern Nevada were illuminated with thousands of fireworks as Las Vegas rang in the New Year 2017, and welcomed 320,000 visitors to celebrate on the Strip and Downtown. Known as America’s Party, the annual New Year's extravaganza encompassed both the live entertainment at the Fremont Street Experience and the much-anticipated fireworks show on the Las Vegas Strip. Co-produced by Fireworks by Grucci, the pyrotechnic display was launched from seven rooftop locations: MGM Grand, Aria, Planet Hollywood, Caesars Palace, Treasure Island (TI), The Venetian and Stratosphere. Photography and video from the Las Vegas News Bureau.